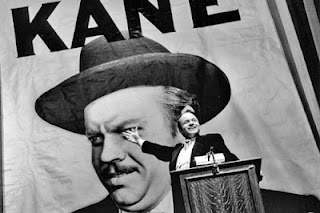 With great embarrassment, I admit that not until two nights ago, I haven't seen Orson Welles' great American film classic, 'Citizen Kane' (1941). I have always known about it and figured one day I would see it because I heard so many great things about it, but I still didn't know what it was all about, let alone why there is such a beloved hype surrounding the film. Now I know, and I'm pathetic in not watching this film much, much sooner. But alas, I have, and it was due to the recent scandal of the Sight & Sound once in a decade Top Ten list which saw Alfred Hitchcock's Vertigo take over the top spot where Citizen Kane has been at for the last three decades.

I've heard the most marvelous and enthusiastic cheers over this film, and I realize that if I dare have a blog that heavily features me giving opinions about films, I could at least take the damn time to see the top two films that critics have raved about for decades. I saw a digitally restored version of Citizen Kane and I consider myself lucky to have done so because for a 1941 film, in it's original state, some scenes and the sound could be dark and dense. The DVD allowed me to enjoy the film as if it were made yesterday and I was amazed by how modern the film techniques and editing of Citizen Kane was done. Orson Wells directed this film as if he made it today. The themes of abandonment, possessiveness, need, greed, materialism, rags to riches, politics, etc., are themes rampant in films today. It also had a mystery element to it because in the first 4 minutes of the film, as the protagonist Kane dies, he whispers, 'Rose bud'. Throughout the film, people who loved and hated him wanted to know what this 'Rose bud' was, and so everyone who was in his life was interviewed to find out more about this man. The past and present time frame in the film was handled with such smooth precision that you knew what decade of Kane's life was being presented along with whatever turmoil or dilemma he was faced with.

Because this film is so beloved, I'm not going to go into further detail in reviewing it with you because, chances are, you have seen it already. But if you haven't, be like me and go out and rent or buy the DVD. I suggest you get the two-DVD set that also includes the 'Battle over Citizen Kane' documentary which covers the history of how William Randolph Hearst was the inspiration for Charles Foster Kane, and that greatly pissed off Hearst who then set out to ruin Orson Welles. This two-hour special provides an excellent historical record about both men and the highs and lows of their lives.

I cannot remember the last film I saw in which I thought it was perfect, so for now here at Theatre of Zen, it looks like Citizen Kane is going to be my first official 10/10 score film. And most of the grade goes to how completely entertaining the movie is, how it stands the test of time, and to Orson's futuristic directing, writing, producing and editing skills that give Citizen Kane a sense that this movie will be something that generations many years ahead can still relate to and be inspired by.