My tiff partner Glenn pulled a rabbit out of the hat this afternoon, and he got us tickets to a tiff opening night film: Tabu. It was going to feel odd being in the midst of all the tiff action in downtown Toronto and not seeing a film until Friday. So as he read the high recommendation for Tabu at the Awards Daily tiff thread, he waited for an hour in his queue online at tiff (no comment) just to have a look around and see what was available, and low and behold, he got two tickets to Tabu. It was a synchronous moment because I was thinking how awesome it would be to see that movie too. So when I read my email from him telling me he got tickets, you can imagine how elated I was! This brings my tiff tally up to 17, the most films I will have seen at the festival in all my nine years of attending.

At the tiff website, here is a synopsis of Tabu: 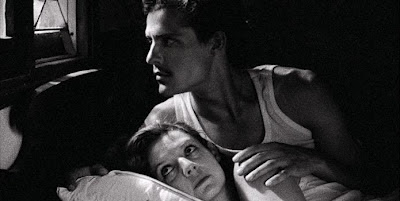 Following the acclaimed Our Beloved Month of August, Miguel Gomes now firmly establishes himself as one of the major talents in contemporary world cinema with his entrancing third feature. Named after F.W. Murnau and Robert Flaherty’s 1931 classic, Tabu is an intoxicating mix of formal daring, political commentary, haunting romance and exquisite beauty. Filmed in black and white, and divided into two parts — "Paradise Lost," set in the present and filmed in 35mm, followed by an extended flashback to the bygone "Paradise," rendered in beautifully grainy Super 16mm — Tabu intertwines a chronicle of illicit love with a subtle overview of Portugal’s colonial history and its reverberations in the present.

In "Paradise Lost," we first encounter Aurora (Laura Soveral) as a mildly batty elderly woman living in modern-day Lisbon. She spends her days exhausting her savings on gambling binges and alienating her steadfast Cape Verdean housekeeper Santa (Isabel Cardoso) by accusing her of witchcraft — a bit of knee-jerk racism that serves as a reminder of Portugal’s colonial hangover. When Aurora is hospitalized, she confides to Pilar (Teresa Madruga), her kindly, lonesome middle-aged neighbour and seemingly only friend, the name and address of a man whom she wants to know of her fate: Gian Luca Ventura.

In contrast to Aurora’s unceasing chattiness in "Paradise Lost," "Paradise" is marked by a total absence of dialogue. This shift is a nod to early cinema, but the roots of "Paradise" reach back further, into the magic of oral storytelling. Narrated by the now elderly Ventura (Henrique Espírito Santo), the film’s second part takes place fifty years in the past, where a much younger and happier Aurora (Ana Moreira) is married, affluent and pregnant, living on a large African estate with a battalion of black servants and hosting garden parties where alcohol and firearms are always handy. Life seems to promise only pleasant placidity — until Aurora falls hopelessly in love with the handsome, moustachioed drummer Ventura (Carloto Cotta), whose band specializes in Portuguese versions of Phil Spector hits. Running away into the wilderness at the foothills of Mount Tabu, the lovers play out their illicit affair under the eyes of a watchful, mystical crocodile.
A colonialist metaphor wrapped in a gloriously cinephilic fever dream, Tabu delivers one of the year’s most rapturous love letters to the cinema.
Posted by Theatre of Zen at 8:24 PM

Email ThisBlogThis!Share to TwitterShare to FacebookShare to Pinterest
Labels: TIFF