Future Trip to Paris was Inspired by 'Midnight in Paris' 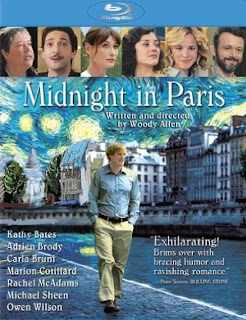 I have wanted to visit Paris, France for quite a while now. Back in 2007, I started to make serious plans, but health concerns derailed that trip. My friend Lucinda in London, visits Paris yearly because she's so close to it and I wanted to go there with her when I visited her in the past couple of years, but it just never worked out for us to go there together. Well, when I saw Woody Allen's 'Midnight in Paris' earlier this year, I really enjoyed the movie more than I thought I would. In line with my fascination with Looper that I saw last week, 'Midnight in Paris' also has a time travel plot to it, but it's very funny and endearing.

The film is about a guy played by Owen Wilson who is engaged to a selfish brat played by Rachel McAdams. He is dissatisfied with his life as a failed writer and he fantasizes about going back into a more pure and exciting time in Paris, circa 1920's, where he really felt a connection with that era. As he is walking around Paris, at the strike of midnight, a fancy automobile from the 1920s rolls up next to him and the people inside invite him to a party. He goes back in time and is in a state of disbelief that he's meeting all of the cool Who's Who of high society of the world from that time, as well as many artists and authors that he is a fan of. But in the morning, he goes back to his hotel in the present and is reminded about how much he hates his current life.

The backdrop of the city of Paris is what is the main character of this film. It's a beautiful and vibrant city that is different from any city here in the States, as well as my beloved Toronto and London. And as I'm a fan of museums, I just have to visit the Louvre. I finally want to see the Eiffel Tower in real life, and I want to sit outside of a French cafe eating and drinking exactly what the French eat and drink.

To psychologically solidify my travel plans, I have bought this France magazine issue over the weekend, I will be buying the Lonely Planet Pocket pal Paris travel book that they suggest as well. I have already bought a speak French cd set. It's on the very elementary end for brief conversational French, but it's a start, and as a visitor to Paris, it would rock to be able to order something in French, and read a French menu, as well as signage while I'm out and about. For convenience, I already plan to spend a few days in London to meet up with Lucinda, and hopefully a couple other friends. Then I will take the eurostar train from London to Paris and spend about five days there. I'm really excited about this trip and I'm going to make it happen either in late May or mid-June, so that gives me plenty of time to save up and plan.

Have you been to Paris? If so, do you have any recommendations for me?
Posted by Theatre of Zen at 5:59 PM