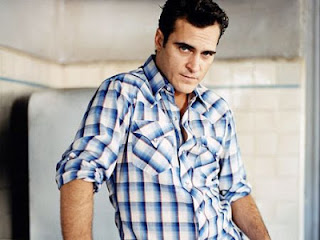 In lieu of today's earlier post below in which I mentioned going to see The Master again this weekend, I found a BRILLIANT interview article with Joaquin Phoenix from Interview Magazine. For many years now, I have greatly enjoyed Joaquin's work, especially in 'Walk the Line', and I have always found him to be incredibly sexy and intelligent. This new interview proves it. As the coming months will start focusing on the 2012-2013 Oscar season, I just love Joaquin's attitude about all the Oscar craziness, and what he truthfully refers to as "bullshit". The entire interview is incredibly enlightening and interesting, and I learned just how real and socially aware and conscious Phoenix is... my respect for him went up several more notches! Read the full interview here:

MITCHELL: So what are you going to do when they put you on the awards circuit for The Master?

MITCHELL: I think we've established that you're the one who's out of his mind. [Phoenix laughs] You don't think that's going to happen?

PHOENIX: I'm just saying that I think it's bullshit. I think it's total, utter bullshit, and I don't want to be a part of it. I don't believe in it. It's a carrot, but it's the worst-tasting carrot I've ever tasted in my whole life. I don't want this carrot. It's totally subjective. Pitting people against each other . . . It's the stupidest thing in the whole world. It was one of the most uncomfortable periods of my life when Walk the Line was going through all the awards stuff and all that. I never want to have that experience again. I don't know how to explain it—and it's not like I'm in this place where I think I'm just above it—but I just don't ever want to get comfortable with that part of things.


If you haven't seen The Master yet, go check it out... and Joaquin better get ready for Oscar talk whether he likes it or not, he's great in this film.
Posted by Theatre of Zen at 12:27 PM