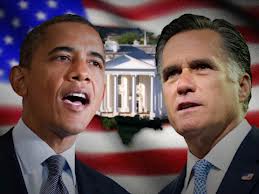 When we go to bed Tuesday night, or wake up Wednesday morning, we will know the results of the US Presidential Election. Will Obama be re-elected, or will half of the American voters who bother to vote in this election will offer the next four years to Romney. This is a very tight race, an unusually tight race for a supposed President who is beloved and cherished by those who are blindly faithful to a party that has let many of us down. If President Obama is so damn good and so damn cool, why is someone like Detroit born Mitt Romney practically even with him, or just a few points behind him in some states, or ahead of the President in other states? As per the latest Poll from Fox News Detroit, Obama has 47% and Romney has 48%... in Michigan... a tried and true blue state! We do have a Republican Governor, and since he's been in office, we have been making a slow recovery. In my prediction, which is just the most base gut feeling, I think Romney will win in such a close race, we will see the re-counting craziness of the 2000 election between Al Gore and George W. Bush. And you know the outcome of that.

I'm still proudly going to vote for a third party ticket BECAUSE their issues are practically 100% in alignment with my thoughts and beliefs as to how a country should be managed. Will they win? No. But it is my hopes one day that a third party candidate can be a true 3rd Party alternative, instead of fodder for jokes and marginalizing those citizens who support third party candidates. How dare people say I am throwing away a vote for a Democrat! Well dammit, if the Democrats did their damn jobs, maybe I would go back to being one. But that ship has long passed and I don't know if there is a reason for me to be a Democrat... I quite like being something else, a Green Party supporter or a Libertarian. I have much more respect for these two parties that the stamp approved two party players who in this "Democratic" system, it appears that they are suggested as the only two. Well, screw that, I'm not falling for that, I do have a choice!

In one of the most ignorant and racist comments in this long election, I have read what Bill Maher has said about Romney supporters. He said, "If you're thinking about voting for Mitt Romney, I would like to make this one plea: black people know who you are and they will come after you".

He's a comedian, but I think he is using himself as being a comedian to express his true beliefs under the guise of a joke. It's disgusting that this race has become so black vs white, it's offensive! With supporters like this, I wonder how if President Obama does win, how will this country fair after his second term? Who ever wins Tuesday night, a lot of people are going to be upset, but I won't be one of them as I have emotionally signed off from US politics in 2008. I'm American and proud, and I want my country to be strong and overcome the trials that we are deeply in right now.  And in order to do that, we need change. For real.
Posted by Theatre of Zen at 9:09 AM

Email ThisBlogThis!Share to TwitterShare to FacebookShare to Pinterest
Labels: Obama vs Romney, Third Party, US election 2012