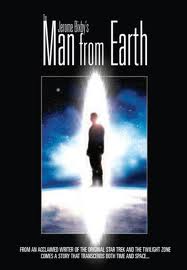 I first saw this movie about two years ago, and tonight was my third time watching it, but the first time I'm reviewing it. I posted my review up at amazon.com where I can buy the video, and I was there to read reviews from other people who watched it to get a sense if anyone else thought this film was perfect too. Out of 251 reviews, 154 gave it 5-stars and 52 gave it 4-stars - these kind of ratings tell you that this is an unusually good film. I gave it a 5-star, and for the first time, I'm going to share another person's review of a film here at ToZ because I believe the reviewer mirrored my sentiments 110% - I'm just too tired to write as eloquent a review, but their name is posted for proper reference and credit. My brief review is first, and then the more detailed 'guest' review comment follows. What I hope to achieve by doing this is to help you make the decision to watch this film, it's really for sci-fi fans who love cerebral films that make you think, and give you the willies in thinking about the 'what ifs'.


5.0 out of 5 stars Spellbinding!,
By
Simone - See all my reviews
This review is from: Jerome Bixby's The Man from Earth (DVD)
Upon my third time watching this film, I felt compelled to share that this is a rare 5-star film. While it appears to have no budget, no special effects, no fight scenes... Man From Earth is a true cerebral sci-fi feast that really makes an intelligent and open-minded person think, 'Hmmmmm, very interesting, what if'? I'm that person. The film honestly captured the realistic emotions and responses of the cast, who are playing university faculty staff of the philosophies and religion departments, as they listen to a confession from John Oldman as he tells them he is 14,000 years old. Those who are strict Christians may have issues with this film as it makes you think and challenges dogma, but those who are more spiritually inclined find this to be an amazing adventure to give pause to inquire 'what if' and 'it could be'. The heavy dialogue may turn off those with a low attention span, but for others, they will be spellbound in this fantastic storytelling.

Brilliant guest review to be shared:


4.0 out of 5 stars I Loved It, and Would Have Loved More,
By
Brian D (Virginia) - See all my reviews
This review is from: The Man From Earth (Amazon Instant Video)
.
NO SPOILERS!!!

Imagine a group of professors and friends are attending a going-away gathering, and one of them blurts out that he's been alive for 140 centuries--14,000 years. What would you do?

Well, more properly, what would THEY do? A group of professors--people who love to intellectualize the improbable, to seek out empirical details to prove a thesis--THEY begin to ask questions of him, and out come the details. His panel of interrogators are an anthropologist, a biologist, an archaeologist, a devout Christian who is an art historian, and one very upset psychologist.

What follows is our movie, which is essentially an hour and a half argument-slash-discussion. Given such a proposition--as well as being told there is essentially NO change in this film's setting other than stepping out into the yard--one would be prone to call this movie boring, unchallenging and a poor way to spend 90 minutes.

But you couldn't be further from the truth.

Our caveman, John Oldman (c'mon!), is forced into his revelation; the movie begins when he is cornered at his home after skipping out on the faculty's going-away party. A few hints are dropped at the onset: among his sparse belongings is a very authentic-looking Van Gogh; he possesses a fascinating and very rare archeological artifact; and one of his friends says he hasn't aged a day in the 10 years they've been together. As they pressure him for the reason for his sudden departure from their faculty he blurts his news: he's been alive since the age of Cro-Magnon man, some 7,000 plus generations ago (and boy, is he owed some Father's Day cards!).

Obviously, his friends find it hard to believe, and the movie consists of their interrogation. What follows is a more serious-minded "Forrest Gump," as his observations inform the movie: from cave art to early migrations, from Sumerian to Indian to European to American cultures, from his interactions with Buddha to the founding of Christianity...John Oldman was there.

What is fascinating is how well his story holds together, as well as how interesting it is. If you find yourself questioning how such a topic could actually hold your attention, think: wouldn't you find it fascinating to meet such a man? What questions would you ask him? How would you try to poke holes in such a story? As the characters here are college professors, they are no slouches when it comes to dissing out the facts behind these events and eras.

So what IS the truth behind this story? Is he a shyster attempting to delude his friends? Or is he a caveman who has become a well-educated man (holding 10 doctorates). Of course, I won't reveal that detail. What I will tell you, however, is that the movie is clever and enthralling, both from a historical point of view to the psychological: for if his tale IS true, what would such a confession do to OUR cultural, historical and religious beliefs? When you're faced with eye-opening news about beliefs you always held to be sacrosanct, what happens to YOU?

From John's supposed interaction with pagan mythology, through Buddhism, to modern religion, there are few sacred cows he is does not topple. One line I particularly liked from the movie--a line spoken by John Oldman--is, "Piety is not what the lessons bring to the people; it's a mistake they bring to the lessons."

I enjoyed "The Man from Earth." I do believe it is a bit brief and could have benefited from a little more historical revelation--but I will tell you that it has a terrific ending, one I really enjoyed. In addition, it is well cast: David Lee Smith plays the caveman, and several other actors will be recognizable to you. All handled their roles well and lent believability to this small but intelligent film.
Posted by Theatre of Zen at 9:12 PM