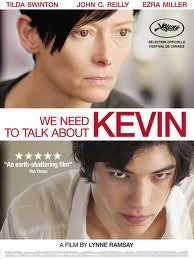 But they never did! I watched this Tilda Swinton and John C. Reilly film the other night, and I expected a deep drama, not a horror film. Tilda and John are a married couple who were free spirits and traveling the world and being all happy, until she became pregnant. She gave birth to a child who let her know immediately that it didn't like her. This manipulative little creature hated his mother and used his father to emotionally play games with his mother. The film goes back and forth in a pre- and post- 'tragic event', allowing us to see Tilda in her prime, as a conflicted mother who wanted to love her child, to being alone after her world changed.

What bugs me about this film is that if a child exhibited the severe indifference, psychotic, lying liar, bipolar craziness that this child Kevin did, a parent would seek out help from a number of doctors and psychiatrists until they found the answers as to why their child is the devil in disguise. You don't just stop at one lazy doctor who quickly looks over a 4 year old and declares him "perfectly normal", you go get second, third, or sixteen other opinions until someone confirms what you suspect. But no, in the pursuit of the happy life and having a luxurious rich life, and have another child, the mother and father dismisses the troubling signs of their son, brilliantly played by Ezra Miller. However, until he reaches the age of 15-16 and causes an accident with his little sister, that's when they start to wonder something ain't right... but it's sixteen years and two hundred disturbing incidences too damn late.
I felt so sorry for the character of the mother because she did try to love the child and bit her tongue many times because the father did not see the evil signs of Kevin. And that's only because Kevin played his father like a violin, played the perfect son, like a normal kid, but deep down inside, he hated him and only did it to emotionally abuse his mother.The lack of proper intervention from medical authorities make this story seem unreal because the mother KNEW something was messed up about Kevin, but did nothing concrete to deal with him. In the end, she wound up a victim in the worst imaginable way. 'We need to Talk about Kevin' is a film that I can only watch once... it's just too sad and terrible, and I hate the way the mother is treated by the community based on the actions of her evil son. Does that happen in real life, probably because when people loose someone they love, and the accused is in jail, the people act out against the next best person - the parents. But in this film, it seemed too extreme, and therefore, unrealistic.

In about a week, I will post a link to a website I have designed for my Communication Activism course. I need to give a presentation on December 11th regarding my website and I would greatly appreciate your help in reviewing the site and responding to the blog postings. I will give a demonstration about what the blog is all about, and show the class and my professor the responses the website is receiving on the special topic about Food & Health Activism. To give you an idea about what Food Activists protest about, please visit this website to read about how last week in California, Proposition 37 was defeated. It's a case that is close to my heart as I have been aware of this issue for quite sometime. Anyone who is interested in knowing what they are eating and where it comes from and how it was grown or raised, would be interested in checking out my class project website... which will become a permanent project for me afterwards. Stay tuned, and thanks in advance!
Posted by Theatre of Zen at 11:26 PM