﻿ ﻿ On Sunday morning I tweeted this:

My friend Emilie, from France, asked me to elaborate on the 'very french' part. I replied:

I like watching quirky films, they remind me that when it comes to cinema, there is no one way to make a film. It makes me enjoy the art of film making even more when I'm reminded about the originality that goes into some films, and Holy Motors lived up to it.

In layman's terms, the film is about Monsieur Oscar, brilliantly played by French actor Denis Lavant, who spends most of a day inside the back of a white stretch limousine, and changing into different characters as his driver, Celine, takes him to various parts of Paris (this film delightfully whetted my appetite in my preparation to visit Paris this summer!). Before each session, Celine gives Oscar a file which explains his next session. He starts putting on makeup, wigs, and clothes of the next person he will be. 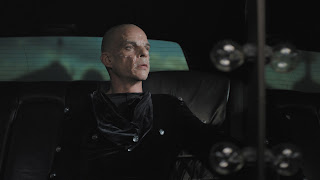 As he prepares for the craziest character, Oscar reads the plans and says, 'Shit', which indicates that it's something he's not really keen on doing, or, he's shocked by what he has to do. This is the only time where I got the impression that he's being directed to do this by some unknown source or people. Is this even real... who does this? Later, Oscar is visited in his car by one of the people who is behind his job/life and tells Oscar that the 'others' are sensing that Oscar is not giving his all, people are watching him and want to be entertained. And we start to see how this is affecting Oscar... maybe he is getting tired of pretending to be a circus monkey for people with money to burn and sick fetishes. Oscar also has to kill some people, so this leads us to believe that he's also a hit-man working for the mob.

I don't know if part, or all of what Oscar was experiencing was a dream... the opening sequence surely was, but what lead to it? In regards to my saying that this French film is "very, very French". Denis Lavant's nudity went the next step further compared to Michael Fassbender's nudity in 'Shame'. I'll say no more. The French are just much more uninhibited when it comes to nudity, and that's fine because it's the human body, why should we be scared of it? The French also have a sensual worldview that is different than American and British sensibilities, and I just find that bold, daring, and refreshing.

Argo is going for that Oscar! 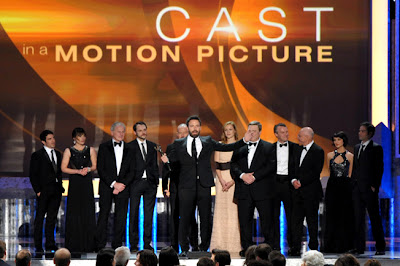 The Screen Actors Guild (SAG) awards gave Argo the Best Cast in a Motion Picture statute last night, which is basically equivalent to the Best Picture. This is another great boost for Argo to go ahead and win the Best Picture Oscar. As Producer of the film, Ben Affleck will get that Oscar for himself, and Argo also won Saturday night at the Producers Guild. Basically, Argo is on fire!

One of my TIFF buddies, David, asked me a question last night because he's not on the Argo bus and he wants to get a better idea of why the heck it's doing so well, and why I like it:

Hi Simone,
I know you're a fan so explain to me -- what am I missing here?
I thought it was good but as a political thriller it didn't compare for me to such classics as All the President's Men, Z, or Missing.

I am totally shocked it keeps racking up awards. Not when there are so many other good movies being nominated.
The film is definitely winning the Oscar for BP--which leaves best director as a mystery. I am hoping anyone but Spielberg.

Hi David!
Dude, Argo rocks because it's a story about the human spirit of someone putting their life on the line to save a group of people. It's a feel good movie where literally, Hollywood is the Hero. A fake movie is created just so it could be used as a cover to sneak out six Americans from Iran who would be executed if found hiding. Also, it features America's baby sister, Canada, as the crucial piece in saving six American's lives. I loved it in Toronto, the TIFF audience ate it up, and it's going to win the Oscar.

So there you have it. If you're on the fence like David, just go see Argo and have a box of raisinettes too. It's a really good film and I'm glad it's doing well.