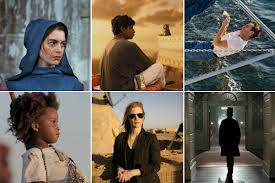 There is an Oscar contest at the Detroit Free Press (for residents of Michigan only) where they are giving away $1400 in prizes ($1000 1st place, $300 2nd place, and $100 3rd place). It would be remiss of me to not participate in this local contest! So with that, my predictions are pretty much sealed, and I feel that based on my selections, I need to offer up some explanations.

I select Argo. I love this film, and due to the 'Poor Ben Affleck' director snub controversy, I think that gives Argo a hefty edge over Lincoln and Silver Linings Playbook.

I'm going out on a limb, and I feel that I must be completely honest and go against the grain at the risk of my sanity. But I'm going to call this for Joaquin Phoenix! Remember how I was a little disappointed in 'The Master' after seeing it at TIFF? Well, that film was the 4th film of that rather busy day, and I was exhausted while watching a film that needed one's attention. I reckoned that upon a second viewing, I would better enjoy it, and I definitely did. Joaquin was brilliant in this film and showed an emotional range that no other actor showed this year. I also have a hard time accepting that the brilliant Daniel Day-Lewis could win a 3rd Best Actor OSCAR, while someone like Joaquin, on his third nomination, would still be win less. If anyone from AMPAS is reading this which I doubt unfortunately, please vote for Joaquin, he deserves this Oscar. Unlike DDL, this will be probably his ONLY shot.

Although I have not seen Amour, yet, I have been greatly impressed by all the wonderful things people and critics have been saying about Emmanuelle Riva's performance of a terminally ill elderly woman. I think probably the main reason why I haven't seen Amour yet is because it's a serious tear jerker, and I hate tear jerkers because, they make me cry. Duh! But with aside, I should see this film and it will confirm why Ms. Riva should win. BTW, as an Oscar factoid, Emmanuelle will turn 86 years old on Oscar night, and she's the oldest Oscar nominee. How fitting would it be to honor this lovely woman by giving her an Oscar that she otherwise would totally deserve?

Everyone of these guys already have an Oscar, can you believe that? I have seen three of these performances, and of those three, I have selected Tommy Lee Jones. Lincoln is a fine film, and because I don't think it will win Best Pic, and it's iffy that Spielberg will indeed win Best Director, and chances are good for King DDL to win Best Actor, Lincoln could also win Best Supporting Actor.

I would like for Amy or Sally to win for their roles respectively, but AMPAS loves pretty women under 35 who are either naked, nearly naked, shaved heads, dying, and singing in movies. Anne Hathaway has that covered, and at 30, she seems to be the likely winner. Again, I prefer Amy (3 times nominee, 0 wins) or Sally (2 time Oscar winner), but this is Anne's to lose.

Oh boy... now if Ben Affleck or Kathryn Bigelow were rightfully nominated, this would be a very, very tough category. Along with having seen Argo and Zero Dark Thirty, I have seen 'Beasts', and 'Lincoln'. So this category is my most shaky because I have not seen Amour, Pi, and Playbook yet. My decision is purely based on sentiment and I'm calling it for Spielberg, but I will be gobsmacked if Haneke won, and that's only because he would deserve it and should have won for 'White Ribbon' a few years back.

Visual effects: "The Hobbit: An Unexpected Journey," "Life of Pi," "The Avengers," "Prometheus," "Snow White and the Huntsman."

I don't know why the Free Press added this category, maybe it's the tie-breaker. But in any case, it's the easiest category because Life of Pi owns this Oscar already!

So you may be left scratching your head at my selections for the Detroit Free Press contest, but since I'm not an Oscars statistics person, and I don't care to play the numbers game. My selections are based on hopes and gut instincts. And don't you think my ballot is a lot more interesting than the current favorites? And another thing... I'm still not going to watch the Oscar telecast on Feb. 24th, it's much more fun reading the live comments from movie fans at Awards Daily, and that's what I'll be doing.
Posted by Theatre of Zen at 3:59 PM