I'm fascinated with the Oscars, but not enough to watch them 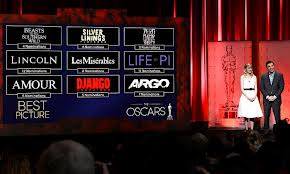 I was asked by my friend this morning if I plan to watch the Oscar telecast on Sunday, February 24th. I told him that I no longer care to watch the program because I'm sticking to my heartfelt belief that the event is far too political and practices selective discrimination over its nomination process, and the selection of winners. In a fair world, which we do not live in, the Academy Awards would probably be more thrilling to watch because you would feel like being on the edge of your seat as to who would win, and which picture would be bestowed the highest honor of the evening. However, I don't think that time ever existed with AMPAS... they have always taken the easy way out.

Last week at Awards Daily, I posted a reply to an article that was ranting against the success of Argo at the expense of Lincoln. As much as I enjoy spending time at AD, they have a tendency to alienate their readership by being such strongly biased supporters for a particular film. It was first noticeable two years ago with The King's Speech vs The Social Network. With my supporting 'Speech' and AD supporting 'Network'. It was very nasty, but my preferred film came out on top. Fast forward this year, the same thing is happening and it's a shame because in my opinion, I enjoyed both Argo and Lincoln. They are two very different films, and it's hard to say, 'oh film X was just better than film G', that's not so clear cut. Both films are fine films, but yet again, people who are pro-Lincoln fans, slam Argo for being a 'made-for-tv' quality film (the same childish argument they used against The King's Speech). And in the same breath, they deem Lincoln to be a masterpiece. Art is entirely subjective and when it comes to the Oscars, the film with the highest preferential #1 votes, wins... and it looks like Argo pretty much has it in the bag. But I digress...

What I wanted to point out about my AD post was that I listed three things that happened with the Oscars in both the winning process and the nomination process that made me look at the Oscars in a different light, and prompted me to distance myself from it. For me, Oscar had it's three strikes against it (three strikes and you're out in baseball) and I present the following:

In 1999, Shakespeare in Love won Best Picture over Saving Private Ryan - this was unbelievable

In 2005, Crash won Best Picture over Brokeback Mountain - I was so pissed off about this, and I knew that it was due to AMPAS members not wanting to watch a gay love story theme, and awarding such a film. Even though Ang Lee, the director of BM, won Best Director that year. It was a travesty and I fully understood at that very moment, how faulty the voting process is, and the discriminatory attitudes that play a role in selecting a true winner, especially when you have two high profile Academy voters announcing that they would not even watch the film. For the record, I saw Crash and Brokeback that year. I thought Crash was good, but a very contrived film that was exaggerated for drama, but decent otherwise. However after I saw Brokeback Mountain, and my really favorite that year, another Spielberg film, Munich, I knew one of those deserved to win.
﻿
﻿ In 2012, my favorite actor, Michael Fassbender, was not nominated for Best Actor for his brave and honest portrayal of a sex addict in Steve McQueen's Shame. The man won a host of awards in the four months prior to the nominations and he was expected to be one of the five nominees along with George Clooney and Brad Pitt... sizing up what would have been a most handsome lineup of Best Actor nominees. But it was not meant to be. The film's NC17 rating killed it, on top of Michael's male nudity which makes regular men intimidated and ashamed... pun intended. I was so upset by this snub that I swore off watching the Oscars last year and I'm keeping my promise. I cannot in good faith, support an organization that finds Michael Fassbender's performance too risque to honor with a nomination, but yet for the Best Actress, nominates an actress who was in a film that was a brutal R rated film, lots of death, blood, sex, and female nudity. You saw the actress in all angles of nudity, but alas, she's female. According to AMPAS, Female butt naked nudity is A-Ok; male butt naked full frontal nudity, is WRONG! I do not accept this sexist attitude and selective discrimination, and therefore, I don't have time to watch the Oscars.

So what I will do is read the play by play action of the ceremony at Awards Daily while doing something else, like, homework. Each year I read from acquaintances online that they are fed up with the politics and BS of the Oscars and don't want to watch them. But for some people, it's a hard habit to break, and they give in to it. Others are like me and refuse to watch the show. I admit, this year may be interesting to watch because I think Seth MacFarlane is going to be a good host, and with so many top singers on the program singing the themes from the films, including Adele for Skyfall, and don't forget the 50th anniversary celebration for the James Bond film franchise, it is most tempting. But I have to stick to my principles, there is more to life than the Oscars and sometimes, when something conflicts with your morals of right and wrong and fairness, you have the right to not want anything to do with it. And for someone like me who otherwise loves to discuss things Oscar, I'm taking a pass on actually watching the show because I don't want to endorse a program that has a terribly flawed nomination and voting process, is ultra conservative, and narrow-minded.
Posted by Theatre of Zen at 12:37 PM

Email ThisBlogThis!Share to TwitterShare to FacebookShare to Pinterest
Labels: Oscars 2013