Come on Paris, I thought you were better than this!

It's disheartening to see these protests over the weekend in Paris over recently passed legislation for gay marriage in France. I'll be visiting France in early June and I'll be walking along the famous Champs-Elysees. Why is it that when the economy is not so good, people take their frustrations out on a select group of people? Why not focus on improving your own life so that you won't be so bitter and hateful? The same kind of hate happened during World War II. Isn't it time that we as human beings stop being prejudiced against someone different than us? Homosexuality is a part of human nature. Man made religious and man made laws create hostile attitudes and inequality social problems. Now it's time for all humans to be human and live and let live. If you are straight and don't want gays to marry, then don't marry someone of the same sex. It's as easy as that! 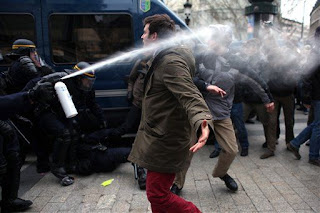 A massive anti-gay marriage protest in Paris ended in violence yesterday as police used tear gas and batons on activists who tried to get past police barricades onto the Champs-Elysees. Hundreds of thousands of people had traveled to the French capital for what was seen as a final protest before legislation allowing gay marriage and adoption is passed by the French Senate, the BBC reports.

The legislation passed France's lower house last month and is expected to easily clear the Senate, which is dominated by President Francois Hollande's Socialist party. Support for the marriage bill has dwindled, however, amid wider discontent with Hollande's failure to improve unemployment figures or the crisis-plagued French economy, the AP reports. Officials say the hundreds of demonstrators who stayed to battle police at the tail end of yesterday's protest were mainly from far-right groups.
Source: Newser
Posted by Theatre of Zen at 11:16 AM