Kate, The Duchess of Cambridge is going to have, a girl 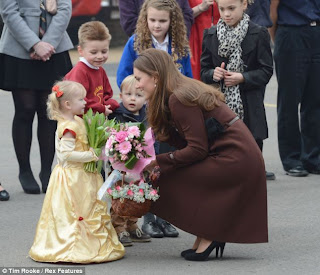 This is what I chose to believe of course, and all the long. And with Kate having a slip of the tongue yesterday in saying in response to receiving a cute teddy bear, 'Oh this is our d...'. That's when girlfriend caught herself and quickly moved on with her pretty smile. Then some smarty pants nosey commoners insisted on asking her if she was going to say 'daughter', and the royal back peddling began. And now thankfully, it's all on tape. LOL!

Watch the video at The Daily Mail!

I will confess with not an ounce of shame that I really like Kate and William and wish them the best. I saw on TV when Prince William's parents got married, I cried the night when I heard his mother died in 1997, and I watched him and Kate get married in 2011. As much as I am intrigued by the British royal family, I'm very glad that we don't have a monarchy here in the states, and that we are not a commonwealth. But it's all good as I can say that I'm a proud Anglophile and drink this stuff up like crazy... and then move on.

When it was announced that Kate was pregnant, I hoped then that it would be a girl, and I have maintained that interest. This is what I posted at the Dlisted gossip blog earlier today:

"She's totally having a girl. She was not about to say dog. People are making up excuses and thinking of other 'D' words, but she was going to say daughter and caught herself. Any other 'D' word and she would have said it. The woman slipped up in a sweet way. She's carrying the future Queen and this American anglophile is delighted.
I personally think that a girl is what they both prefer anyway... mostly to honor William's mother in some way." - me

So, time will tell when they either make it an official statement, or when the baby is born in July. If they have a bouncing baby boy, well, many of us will feel quite silly. I will be in London in early June, weeks before the baby's birth, but it would be a lot of fun to be in Europe when her baby is born.

I'm still playing the lottery weekly by investing in $1, however, with the Powerball now at $123 million, I asked an office co-worker if she wanted to join in on a weekly ticket purchase with each of us donating a measly 50 cents. She immediately jumped in on it, and provided 3 numbers, and I provided 3 numbers. We are going to adopt these numbers and play them regularly. Hey... you never know. I just feel it in my bones that I can win a sizeable lottery and take care of some things that will make life easier for me and my family and select friends.