Boston Terrorism: I'm glad it's over! 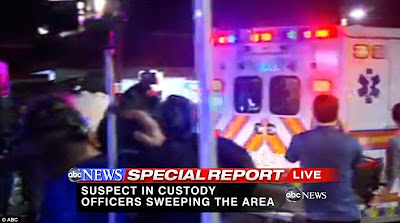 Like many of you, I have been following the Boston Marathon bomb terror since Monday afternoon, and reading updates all through the week. On Friday morning, I heard on the radio as I was getting ready for work, that one of the two suspects was killed and the other was on the run. Subsequently, the entire city of Boston was on lock down in an effort to protect innocent civilians from possible gunfire shoot-outs. While at work on Friday, I listened in on NECN Live, they are a live stream news channel. Sadly, at a time like this, it was frustrating that none of the major networks allowed live stream of their broadcast. But in any event, I didn't need them anyway because I got news in other ways.

It was anxiety producing and stressful watching the waiting game of when they would find Dzhokhar Tsarnaev. The 19 year old punk did the unthinkable: Caused a major American city to be on lockdown. Never before has this happened before! Impressively scary. In the back of my mind, I figured that he was either far away and travelling to another state, or he was very close by, VERY close by. Surely in all the gunfire exchange he had to have been hit, and if that was the case, the slow loss of blood would tire him and he would be found dead somewhere or unconscious.  But in the end, he was found hiding in a boat at 67 Franklin Street (surely an address that will be famous forever, the owner may even have to sell the home for privacy I bet!)

Of all of Dzhokhar's relatives who were interviewed yesterday, his useless father, his deranged aunt, it was his uncle in Maryland, Ruslan, who proved to me the most decent and intelligent. It is now no wonder why Dzhokhar eventually turned on the city and country that raised him. It's too bad that this bastard could not assimilate into American society and instead of moving out of the country, he choose to help build bombs that killed 3 people, injured around 180 people (permanently maiming most of them for life). He then went on to help assassinate an MIT officer, and seriously wound a Boston police officer in a shoot out.

In the end, I'm relieved he was found alive, he surrendered, and is now in a hospital. He will be questioned to an inch of his life, and he will then go on trial, and eventually given a death penalty sentence, or life in prison and solitary confinement. Either way, it appears that Friday, April 19th, for just a 19 year old, was the last free day of his short life.

I'm proud of what the law enforcement did yesterday in finding the suspect and safely taking him into custody. I hope now that the people who have been directly harmed by his actions can find some closure as he is brought to swift justice!

The Daily Mail has a very good article posted, and that is where I got this abbreviated timeline:

'We Got Him!': Twenty four hours of chaos comes to an end: How Dzhokhar Tsarnaev was apprehended by police after day-long search

April 18 5.30pm - The FBI releases CCTV footage and stills of two suspects from surveillance cameras near the explosion sites filmed shortly before the blasts. FBI agent Richard DesLauriers asks for the public's help in identifying the men who are both wearing baseball caps and carrying backpacks. 'We consider them to be armed and extremely dangerous,' Mr DesLauriers said, warning that they should not be approached.
10.30pm - A campus police officer is shot and killed at Massachusetts Institute of Technology (MIT) in Cambridge, near Boston, after responding to a report of a disturbance.
Shortly afterwards, police get a report of a carjacking nearby. The two men are suspected of killing the MIT police officer, then stealing the car at gunpoint and later releasing its driver unharmed. The suspects threw explosives from the car as police followed it to the Boston suburb of Watertown.
April 19 1am - Witnesses report hearing multiple gunshots and explosions in Watertown. Residents are advised to keep their doors locked and not let anyone in. TV footage shows armed officers surrounding a suspect lying on the ground.
Police later say one of the two suspects in the MIT officer shooting is dead but the other, who is tied to the Boston marathon bombing, remains at large.
Public transport is suspended in the Boston area as the hunt for the remaining suspect continues.
A new photo of him on the loose is released showing him in a grey hoodie sweatshirt at a 7-Eleven store in Cambridge.
5pm - Police admit at a press conference they don't know where 19-year-old Dzhokhar A. Tsarnaev is. Authorities lift 'shelter in place' orders and allow residents to venture outside.
5.45pm - David Henneberry finds a body in his boat on Franklin Street in Watertown, less than three quarters of a mile from where Tsarnaev ditched his stolen Mercedes SUV.
6pm - Officers surround Mr Hennerberry's boat and exchange fire with him.
7.05pm - Flash grenades are reportedly tossed into the boat to stun Tsarnaev.
8.43pm - Tsarnaev surrenders and it taken into custody. He is rushed to the hospital by ambulance