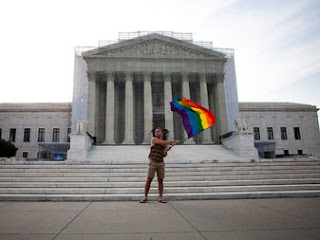 The decision on the federal law was 5 to 4, with Justice Anthony M. Kennedy writing the majority opinion, which the four liberal-leaning justices joined.
“The federal statute is invalid, for no legitimate purpose overcomes the purpose and effect to disparage and injure those whom the State, by its marriage laws, sought to protect in personhood and dignity,” Justice Kennedy wrote. “By seeking to displace this protection and treating those persons as living in marriages less respected than others, the federal statute is in violation of the Fifth Amendment.”
Source: NYTimes
Posted by Theatre of Zen at 1:02 PM