After what started out as an incredibly disappointing and stressful day at 5:31 am - I missed my train by 1 minute due to an overly chatty Border dude on the Canadian side. I wanted to cry but was too angry to do so. The ticket agent at the Train station just put me on the next train that left at 9:05. Those VIA Rail people are prompt as hell because they leave on the mark, no and ifs or buts.

I arrived at my host Glenn's house around 1:30 and we proceeded to start our day. We went to the Spring Day Spa to collect a gift certificate I bought for him for allowing me to stay at his place, then we went to eat at Aroma, an Indian restaurant directly across from the Tiff Bell Lightbox. 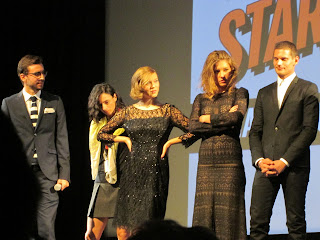 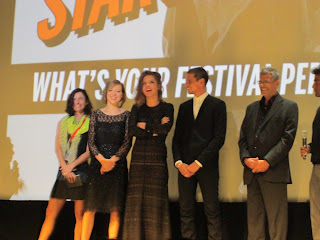 The only movie I was scheduled to see Friday was 'Blue is the Warmest Color', a beautiful and striking film about a young girl, Adele, brilliantly played by  Adèle Exarchopoulos who is only 19, and her coming of age in discovering her inate lesbian desires when she sees a gorgeous Emma, played by Lea Seydoux, crossing the street one day. Love at first sight? For Adele, yes, for Emma, she's already in a relationship, but open to exploring something more. The girls lead two different kinds of lives, Adele is just a shy high school student and Emma is an out lesbian art student. The two eventually fall in love and it's so fast, next thing we know they are living together. A clue to the short-lived romance is demonstrated by Adele's introversion when she sees Emma with her art friends, and being very friendly with her ex and other lesbians.

Feeling not fully loved by Emma, Adele explores other avenues in secret, but once Emma finds out, game over and Adele's world is destroyed. The sex scenes were very detailed and thoroughly exotic. Both girls have beautiful bodies and put everything into making them look like they were actually in love and in a very private moment. In fact, in today's The Guardian article, it is said that both actresses felt they were so mistreated and exploited in the making of the film, especially the 10 day shooting of the sex scenes, that they will never work with director Abdellatif Kechiche, again. And he has hit back by saying, "How indecent to talk about pain when doing one of the best jobs in the world." Well Abdellatif, you didn't have to be the one participating in the marathon choreographed sex scenes. 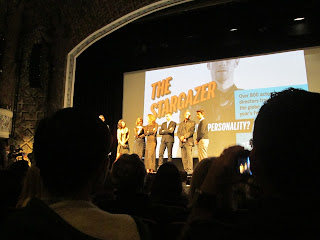 I'll be curious as to how this film will play out in the States.Will the sex scenes be edited down by several minutes? If so, that will be indicative of just how pathetic the MPAA would be if lesbians having realistic sex is something people should not see, yet, decapitations and other horrendous ways to die on celluloid just get an R rating.

Do yourself a favor and watch 'Blue'... it is long, I feel that this could easily be a 2-hour movie instead of nearly three hours. And Adele and Lea are stars to watch from this moment on. But actresses did excellent work and they should be recognized for their efforts in this film.