On a sunny but chilly Sunday morning, I arrived at the Somerset Inn hotel in Troy, MI, answering to the call for extras cast members for an upcoming Warner Bros film being made in Michigan. Unlike the previous two large Michigan extras cast calling for Star Wars and Transformers, the WB people still could not say, the S word or the B word, but we all knew why we were there.

I arrived at 10:20am, and as I would soon enough discover, I was the 716th person in line at that time. With no reliable wi-fi connection, I could not give a minute by minute report to the @HenryCavillNews twitter crew, so I took photos as I progressed in line to document the experience as best I could. Ever since my raving review for Man of Steel last summer, I have been so excited about the prospect of future films with Henry Cavill. But when I learned late last year that the next Superman film was going to be made in Michigan, I knew, I just KNEW I had to be a part of the film making process... or at least write about it while it's being filmed in my home state. And as luck would have it, I was able to drive to Troy to take part of this exciting extras casting call adventure. Here is what I experienced... 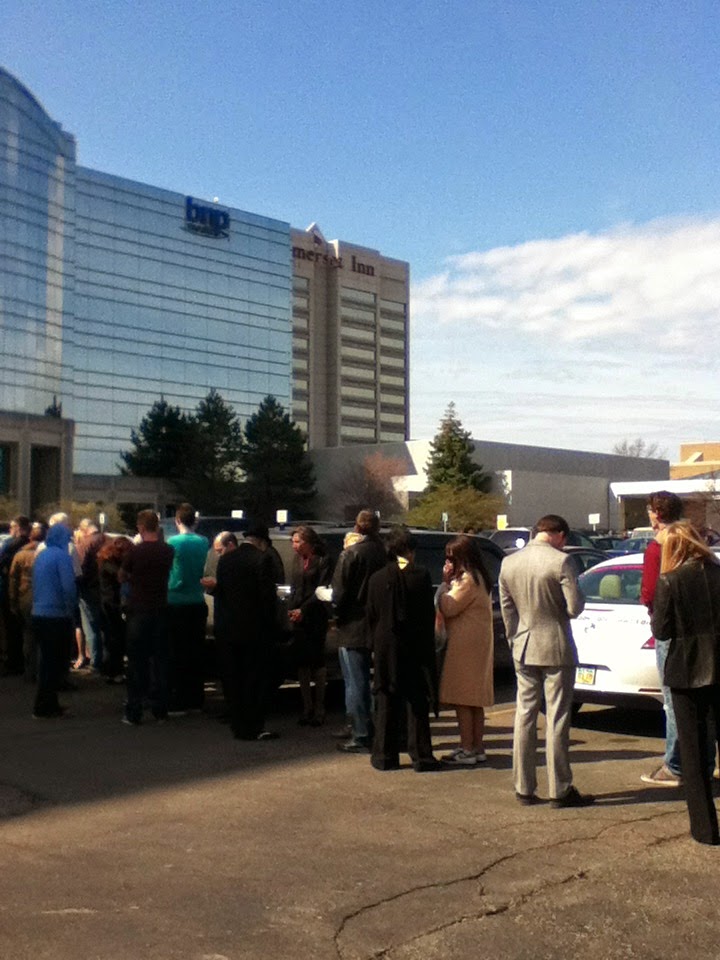 The casting call line started at the main entrance way of Somerset Inn (the beige building in the photo). The line spread going back East of the hotel (this line segment comprised of at least 1,000 people). Then the line wrapped up again along Big Beaver road, containing about 1500-2000 people, then went down through the parking lot and developed near the West side of the entrance way. So basically, the last persons in the ever growing and moving line, was at the entranceway, but in a different line and their wait time was a good 2 hours at that point. 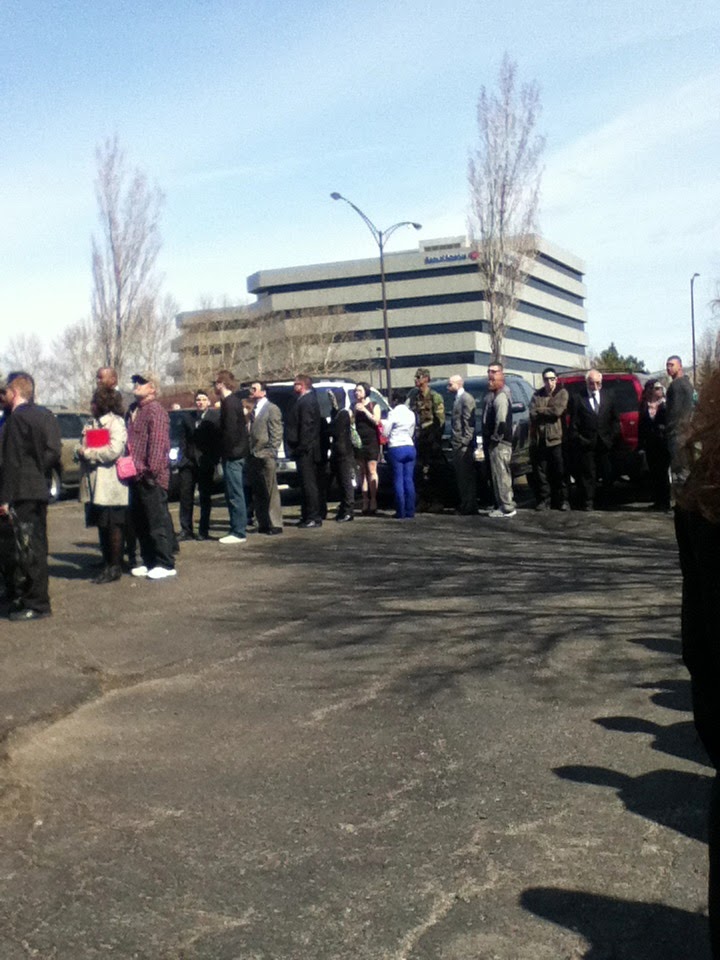 The media announcement instructed people not to come in uniform or dressed in character. I took this picture because one guy there was dress in his army uniform. I saw a diverse range of people, a few people in wheelchairs, and some very old people too with their walkers. I was speaking with one guy from Ohio, in fact, a lot of Ohio folks were there, saw many Indiana and Illinois license plates too. 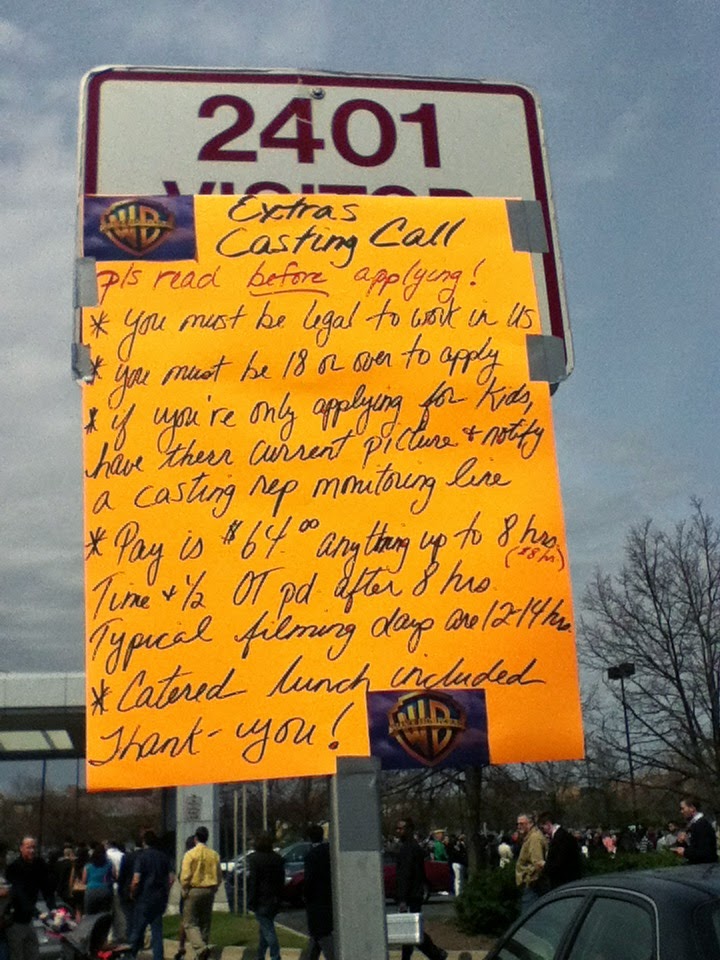 As me and my friend Elizabeth approached the entrance way (they were letting in 100 people at a time), we read this sign.  In summary, you have to be legal to work in the US, over 18, and the job pays $64 for 8 hours, OT is paid, typical work day is 12-14 hours, and FREE lunch. Groovy! 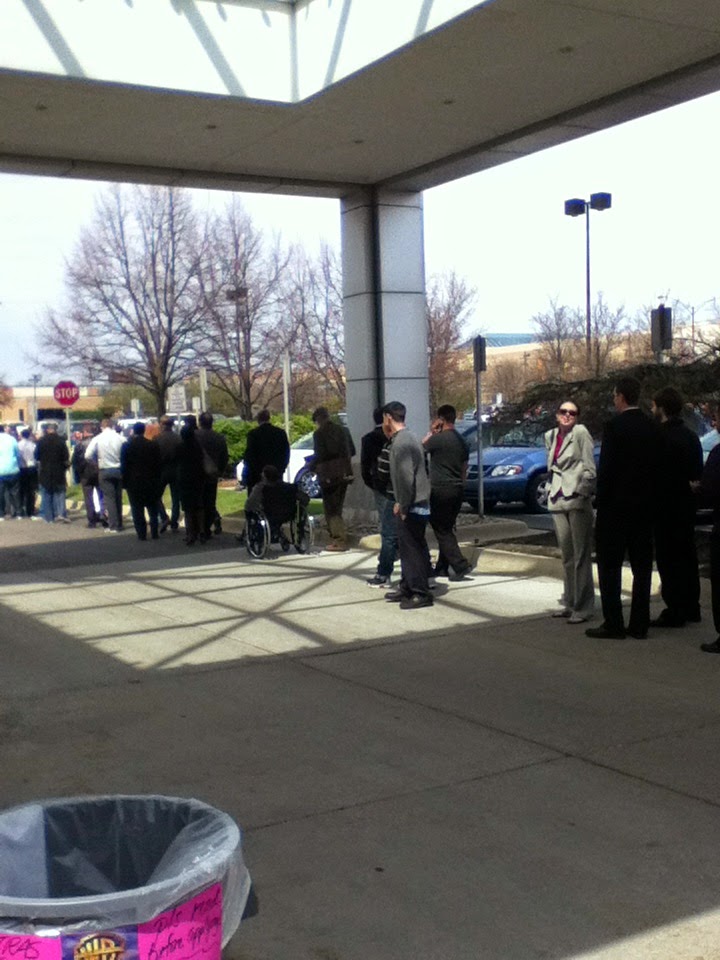 You see the trash bin on the lower left hand of this photo? The entrance is next to it. The folks across the way are near the end of the line. I will be #716, those people will surely be in the #4000s+. This photo was taken around 12:15pm. They just arrived, I've been there for almost 2 hours. 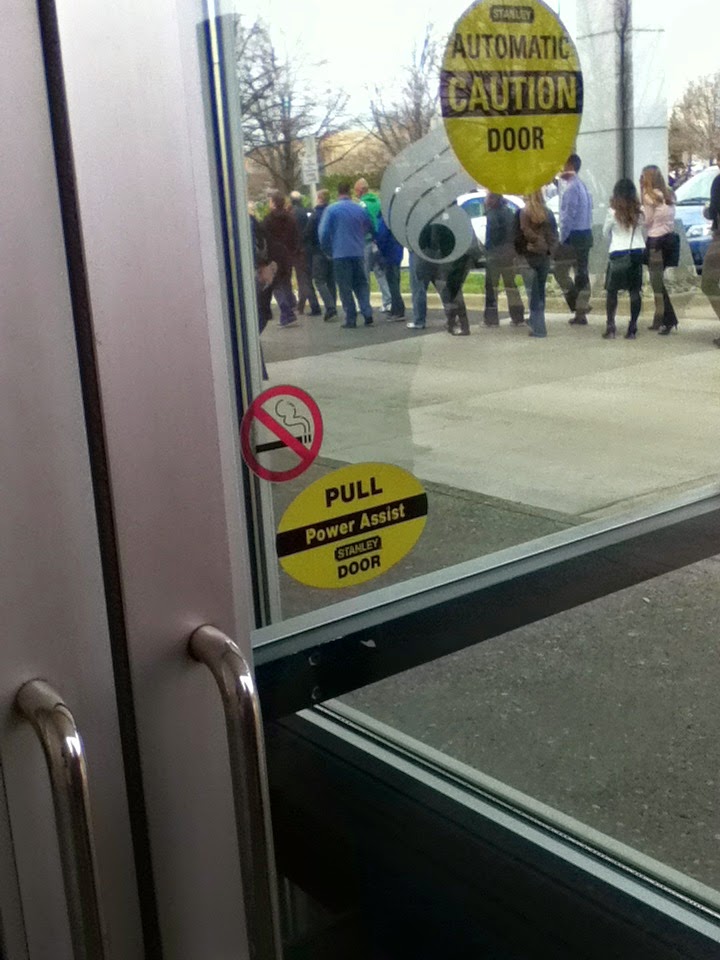 Almost there. The security guy was going to let me in as I was the last of the 100 group of people. But I decided to wait so that me and Elizabeth could go in together. 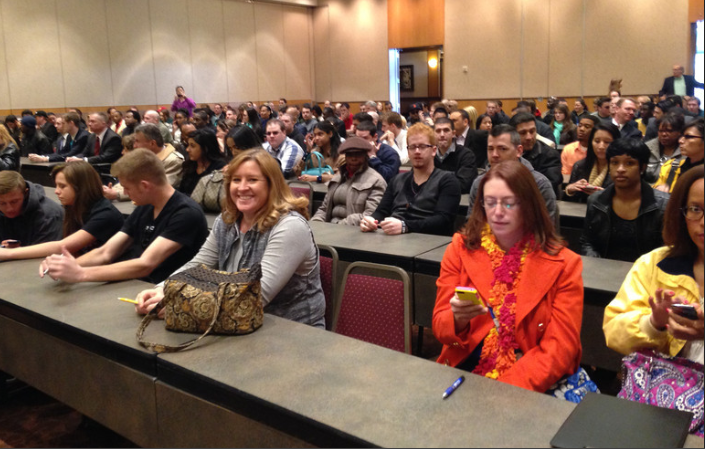 The Oakland Press took pictures of the casting call and in slide number 8, at the bottom right is Elizabeth in orange, and me in the yellow jacket. I'm glad I made the 'cut' for the image. :D 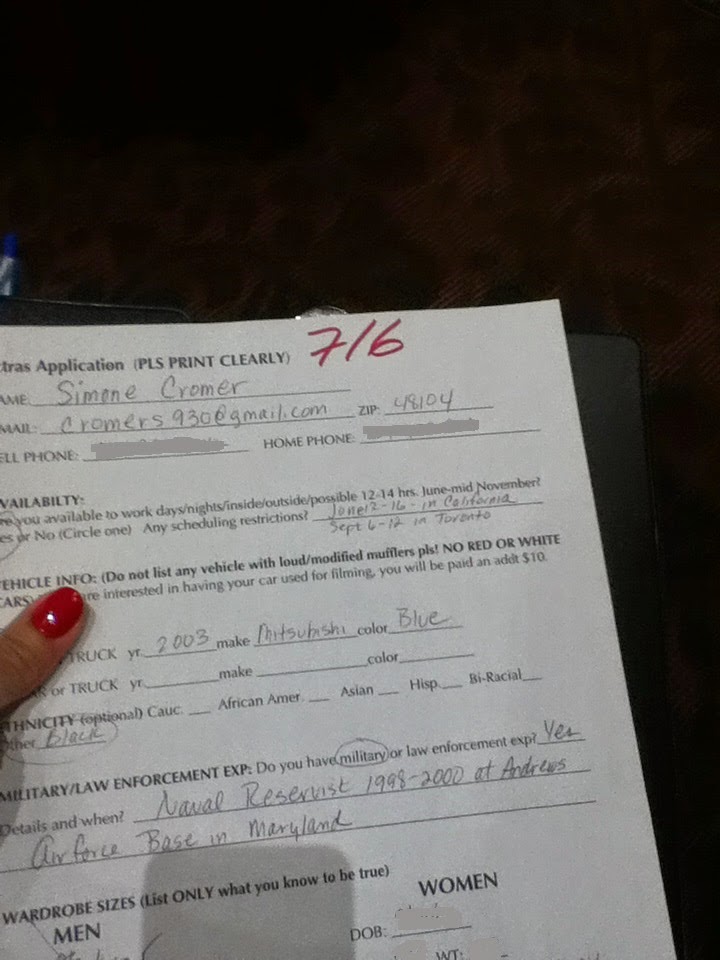 Here is my application, see, I'm #716, Elizabeth was #715. As I'm filling out the application, the process is being explained to us. The casting director explains to us in no uncertain terms that this is a JOB that we should take seriously. They are very, very dependent upon extras and people applying for extras jobs should not have pie in the sky aspirations or neglect their family or career obligations for this gig. As serious as people are able to commit to this job, it can be demanding and time consuming. So with that said, she told us to make note of times we will not be available for the job (I wrote down my trips to California and Toronto) to do filming from June to November. So if I get hired, I should be available for any other time. And since the application asked for military experience, I put down my brief Naval Reservist time while living in the Washington DC area. If anything, it should help, I dunno. But it was a simple application.

One important thing I want to add is that the casting director informed us that the director of the film (again, she didn't mention his name or the film), will personally be reviewing all the applications and looking at our pictures. It's so cool knowing that Zack Synder is going to review my pic and application and either give me a thumbs up or down. 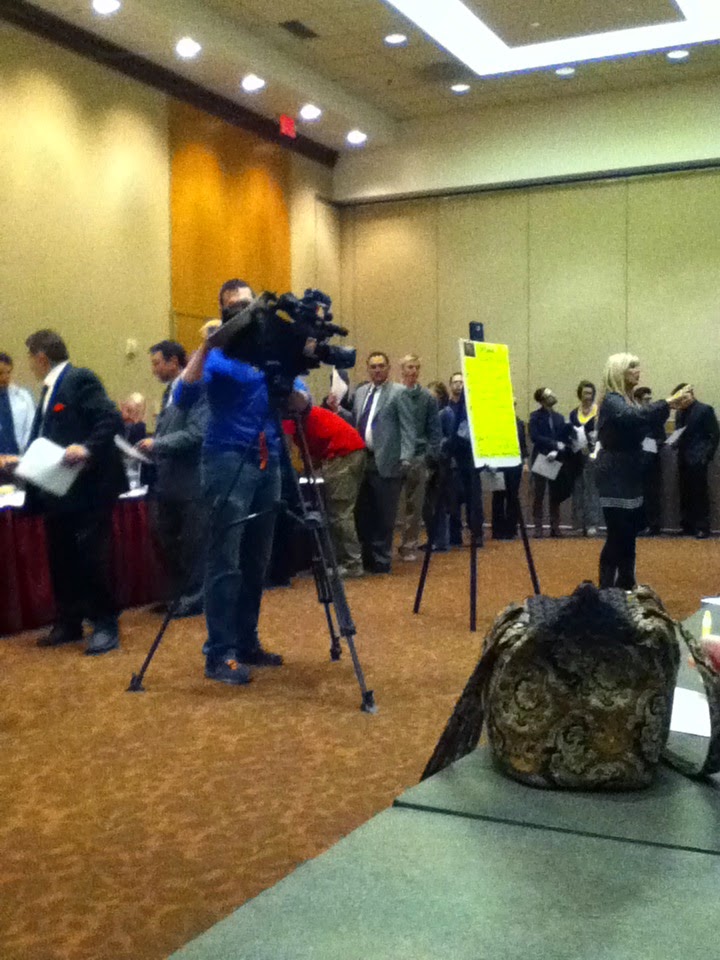 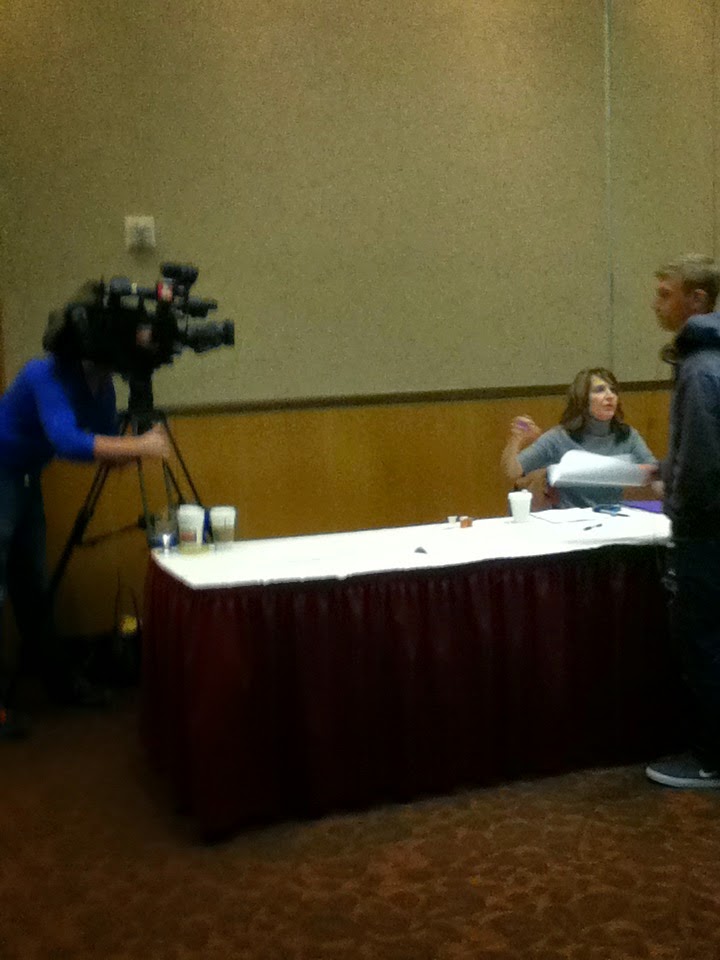 Once completed, we line up and slowly approach the desk where they would quickly review our application to make sure it was legible. It is important that phone numbers and email addresses were legible so that they can contact us about the next step, if offered an extras job. We hand to the guy in the black short sleeve shirt, our application with our bold red number on it. He then writes the number on a small white dry erase board. We are to hold that numbered board up on the right side of our mid torso so that our picture would correspond with the application number. Two photos are taken: a full body shot, and a close up. And that's it. Considering how many people came, the process was very neat and orderly, and the WB people were all very nice. Once the picture is taken, we exited out the door and are handed this slip of paper which gives us more information about the next steps in being cast as an extra. Over all, it was not a long process. It was windy outside and in the upper 40s - it could have been worse, but everyone was in good spirits and excited about the opportunity to be in the Superman/Batman Warner Brothers blockbuster slated for Summer 2016! I hope I made the cut. If I do, I will be very committed to this once in a lifetime opportunity. It's my personal and professional goal to cover the making of this film in Michigan, and having even just a small part of it will allow me to provide a unique insider's view for my @HenryCavillNews friends