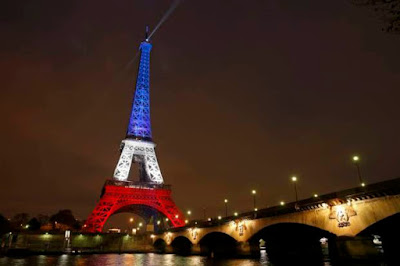 It's been a week since the terrorist attacks in Paris (by an evil terrorist group whose name shall never be typed by me), and I just want to take this time to send my love and thoughts to the citizens of Paris. As I have written in the past year, I am in the planning stages of a big European summer trip with my mom and niece next June. We'll be spending 4 days in London and 4 days in Paris. My niece is particularly interested in Paris and this once in a lifetime trip for all of us is going full speed ahead.

I lived in New York City when 9/11 occurred. My apartment was a mere 6 miles away from ground zero. Although it took a few weeks for us New Yorkers to wake up from the shock of the horrific terrorist attack, we did eventually moved on and became stronger and more united. That is what is going to happen in Paris, and any other unfortunate city that meets the same attack by these barbaric subhuman scum in the future. I know good prevails over evil, but there will be times when evil hurts us, but we always get back up, reassess things, and defeat them. This will happen. But meanwhile, I refuse to change my vacation plans. We're going to Paris and we're going to have an excellent visit.
Posted by Theatre of Zen at 8:55 AM