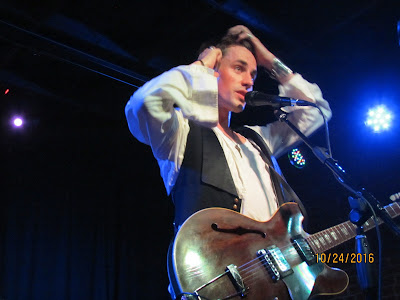 For my first concert living here in the Los Angeles area, I went to see actor and musician Reeve Carney at Molly Malone's last night. I have only been aware of Reeve for about 5 months now, and that's due to Netflix streaming the excellent but recently cancelled Showtime show, Penny Dreadful, where Reeve plays the beautiful but deadly Dorian Grey. Reeve also recently starred in the remake of the Rocky Horror Picture Show where he wonderfully played Riff Raff!  I soon started to research Reeve and learned about his primary occupation as a singer and composer. I started to follow him on his Twitter and Instagram accounts, and I listened a little bit to his music. What small samplings I heard was enough for me to determine that he was someone I should see in concert if I got the chance. 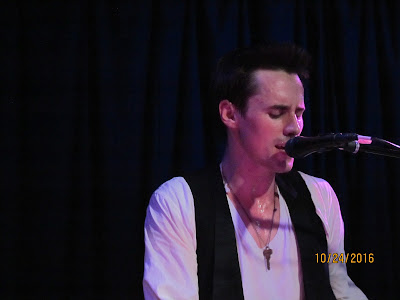 Well, lo and behold, Reeve's new Fall tour commenced in LA Monday night, October 24 at LA's Molly Malone's, a popular Irish pub that host bands in its 150 occupancy concert room. To describe Reeve's music, I would say that he's an artist that is obviously influenced by blues, soul, rock, a little bit of country, and jazz; he's truly a person influenced by all genres of music. He plays the piano and the guitar with brilliant precision, and he's very animated, engaging and lively during his show. I had the pleasure of being in the front row of the general admission, standing room only audience and it was amazing being so close to such a beautiful soul who knows how to sing and put on an excellent show. Reeve was also supported by his equally talented and photogenic brother and sister, Zane and Paris Carney, musicians in their own right. 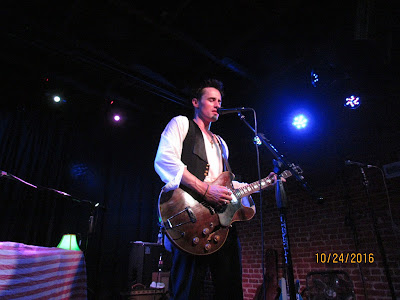 As Reeve explained, although he was born and raised in New York City, he went to high school and college in Los Angeles. So in the early 2000s, he was a regular entertainer at Molly Malone's where he honed his musical talents and developed his following. The audience really loved his music, and we all queued up to buy his CD and other merchandise where Reeve manned the merchandise stand to sign the merchandise and pose for pictures. I did not want my picture taken with him, I was content with the hundred photos I took of him with my camera and iPad. But when I got up to him to have him sign my CD, I shook his hand and told him how much I enjoyed the show and that I've only been following him for about five months and that his show was my first concert in my new home of LA. He thanked me for the honor and asked where I was from, I told him I was from Ann Arbor, MI and he knew the city. In fact, he said he did a show at the Ark on Main Street one time, and he was really impressed with AA. He signed my CD, and I asked for a hug, and he gave me one, before apologizing for being sweaty and wet. Lord, if all mankind can be as delicately sweaty and still smell good like him, we'll all be the better for it.

In all, Reeve Carney put on an excellent show promoting his new CD, Youth Wasted, featuring the sexy Prince-esque song, 'Truth'. One listen to it and you will be hooked on this beautiful and very, very talented, and very sweet man. I look forward to seeing Reeve again in concert one day and I hope more people learn more about his music and see that he is more than a model handsome guy, he is truly talented in the musical sense and offers a stage presence that is greatly lacking in the under 35 musical act scene. 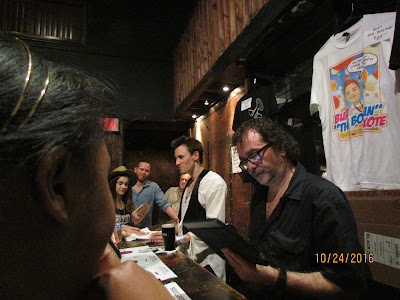