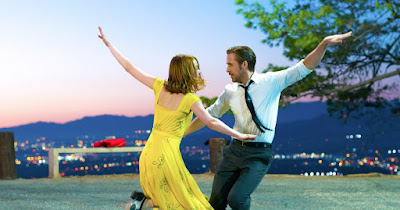 I'm not one for musicals, I usually cringe to the hokey dancing and singing of some musicals I have tried to watch in the past. So when they are released, I tend to ignore them. But in the case of La La Land, there was something magical about this film that really lured me in to it. Besides having a slight girl crush on the gorgeous and extremely talented Emma Stone, and having a grand appreciation for the sexy and somber Ryan Gosling, the story about two young people in Los Angeles struggling to realize their dreams resonated with me, because, I'm a new transplant to Los Angeles seeking my dreams too. The film was released in early December, and I purchased a ticket to see it on Friday, December 9th. But for the first time in my life, after buying an advanced purchase ticket, I actually forgot to go see the movie right after work that Friday because I was very tired and stressed from a busy week at work. It was my intentions to still see it, and the perfect time to watch La La Land was just a few days after it received 14 Oscar nominations!

La La Land has Mia (Emma) as an aspiring actress from Nevada living and working in Los Angeles at a coffee shop. She works at the Warner Brothers studio, right smack dab in the middle of all the action where she's constantly reminded about her dream to be a big star, but first, she has to get a call back from the gazillion auditions she's been going to. By chance, while caught in LA's infamous traffic, Mia has a road rage situation with mercurial Sebastian (Ryan), a struggling Jazz musician who has aspirations to be a successful old school jazz musician and jazz club owner. These two ambitious people bump into each other once more at the height of personal lows and over time, come to share the miseries of the pursuit of their dreams and support each other in obtaining their separate dreams.

La La Land is absolutely beautiful, charming, and fun. The chemistry between Emma Stone and Ryan Gosling is undeniable! It's not a perfect film because as an Angeleno, I was left wondering how could Mia and Sebastian afford their lifestyles and partake in some of the activities around Los Angeles under the guise of being struggling young artists. But that's where the suspension of disbelief takes over in many of the fantasy aspects of this vibrant film. The opening and ending singing and dance sequences were a joy to watch and really made me appreciate the artistic directing, editing, film score, choreography, cinematography, costumes, makeup, etc. of La La Land. The dancing and singing done by both Emma and Ryan were incredible, really demonstrating their abilities of being multi-hyphenated creative talents. 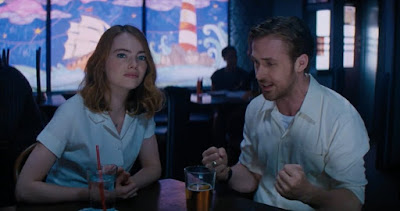 Just when you think La La Land would have a typical La La happy ending, the smart mind game twist at the end really is bittersweet and Mia and Sebastian's polite sad smiles really tugged at my heart and left me thinking about the film and these two charming characters for the remainder of the day. The moral of the story is, in the pursuit of one's dreams, don't neglect the rare magical event of true love - with ego aside, someone has to give up something to be with and support their loved one so that they both can enjoy their mutual successes together.

La La Land has been nominated for 14 Oscars, I will not be surprised if it won at least 8 or 9 categories, including Best Actress for Emma Stone, and I'm rooting for Ryan Gosling too. I believe the movie has Best Picture all locked up, no question at all! It's about Los Angeles, Hollywood, and actors/musicians, and the Academy loves films about themselves. However, as brilliant as director Damien Chazelle is, I think the Academy will spread the love and make the best director win an opportunity to make history and give it to someone else.