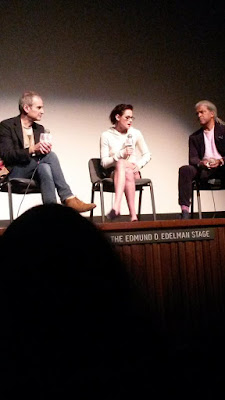 In their second collaboration, Kristen Stewart and director Olivier Assayas go down a creepy American in Paris Gothic film road with Personal Shopper. I was in attendance Monday night at the Film Independent at LACMA screening where after wards, there was a Q&A. Kristen stars as Maureen, a young woman who is still mourning the death of her twin brother three months prior, and is driven to use her medium skills to contact him. She and her brother made a pact long ago that whoever dies first, must let the other one know they are ok on the other side. It’s been a few months since he died, and Maureen hasn’t heard from her brother. She lives in Paris as a personal shopper to a selfish and demanding fashionista/model name Kyra, but Maureen primarily communicates with Kyra through messages left on a dining room table. Feeling isolated in a city she hates and a job that is soul destroying, Maureen is compelled to remain in Paris, the city her brother died, to conjure up a conversation with him, but by doing so, she may have opened up another door.

While Maureen is trying to communicate with her brother in the vacant home where he last lived, she hears sounds and has a frightening experience that may or may not be from her twin. Did Maureen make contact with a different spirit, or did this thing manifest from something, or someone else more sinister? Whatever it is, she awakened something and it begins to stalk her. Soon, this entity, or someone possibly playing mind games with her, sends text messages to her encouraging her to explore the things she is forbidden to do, and one of those things are to simply disobey Kyra’s orders of not trying on her fancy designer clothes. By breaking this rule in secret, Maureen is forced to see how isolated life in Paris has made her feel, and by experience the freedom to do what she wants so she can feel alive and escape her mourning. But she still misses her brother, and is obsessed with contacting him. In a Hitchcockian twist, Maureen visits Krya’s apartment to find a bloody murder scene and she is soon enveloped in fear of the supernatural presence that has been haunting and taunting her. 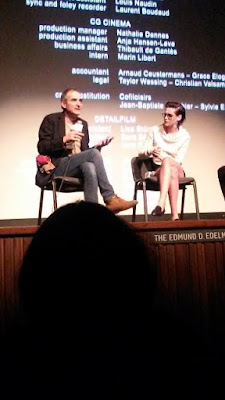 Personal Shopper reveals an intimate view of how each of us manage our grief, and how normal it is to grieve and yearn for some kind of sign for the dearly departed. And if you’re a medium wanting to use your innate skills to contact your twin, that grief can be compounded when you think you have failed; and Maureen gives up hope at a moment when all she had to do was turn around. In her most mature role, Kristen Stewart was marvelous as the tenacious grief stricken young woman. In their Q&A, Kristen and Olivier Assayas described their working relationship as Kristen making his directing more easy and organic, and Kristen says that working with Olivier is so comforting that she will do anything for him because his direction is so natural and inviting.
Posted by Theatre of Zen at 11:11 PM