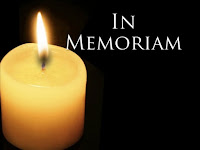 I have been so busy that I can't even bother to update ToZ, but alas, since it's the end of August, I need to keep up the theme of one post per month. However, I'm even more compelled to post this blog article today because I learned that I lost a dear friend back in Michigan over the weekend. I worked at a not so good organization from July 2013 to October 2015. If it weren't for my friend Dana going through the same difficulties, and both of us using each other to be a source of support and private laughs, we would have lots our minds and been even more sad and frustrated.

Dana died suddenly this past weekend due to a rare and aggressive cancer that apparently was just only discovered in the past few weeks. She spent her final weeks at the University of Michigan hospital, where she died. Since the day I left that company in October of 2015, I've been in regular contact with Dana via text messages and phone calls. The last time we texted was on August 1st. She was just checking up on me as usual, and she told me that she was starting a real estate investment company. She wanted to hang in at the 'hell hole' for just a few more months, and then she would be all set to go work for herself. I last spoke with her on the phone back in April. What's so sad is that Dana was only 52 and still had so much to live for. She wanted so badly to leave a bad job that she had been at since 2013, but because of the bad economy in Michigan, and the stigma of the place she worked at, no one would hire her. Because I've lost so many lovely people in recent memory, I have some to accept that death is just a part of life, and it releases the person from the misery that was in their lives. Dana provided a great reference for me upon my move to California which helped me secure my first job. I never had a of friends in my life, just those select few cool people, and Dana was one of them. Dana is no longer sick and in pain, and she is not working at the hell hole anymore. God speed my dear friend, and thank you so much for being there for me. &hearts; 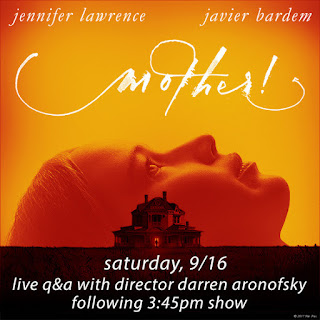 As I plan to go home to Michigan for Labor Day weekend. I think this particular weekend is going to be THE weekend when I go home to visit family from now on. I look forward to making a pit stop in Ann Arbor to get some U of M paraphernalia, and eat a meal at my favorite sushi restaurant! I'm happy to see family and a few friends again, and to get away from my current "job". I've been interviewing, but haven't found the dream job yet. I know I will soon, I've made it this far to California, I'm not giving up now. The weekend after next, I go see Eddie Vedder at the Ohana Music Festival, and the weekend after that, I'll see director Darren Aronofsky for a Q&A at The Landmark for his upcoming film, Mother! starring his girlfriend Jennifer Lawrence. Since I'm missing out on TIFF this year, I'm looking forward to seeing at least one film that is making the festival rounds that is highly anticipated. After getting the email that tickets were available, I went to the website and had a hell of a time trying to buy tickets. I was lucky finally getting a ticket to this film and Q&A as it sold out quickly for a convenient Saturday afternoon screening.

I want to update ToZ much more frequently moving forward. I miss writing for ToZ, and it's always been cathartic and a source of stress release when I update the blog.