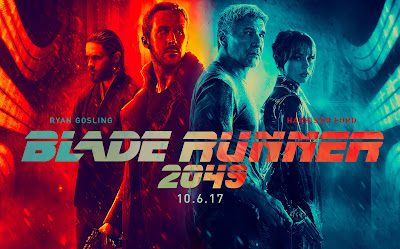 It is extremely rare that I watch a film and want to see it again immediately. This is the case of Blade Runner 2049, the follow up sequel to the incredible Blade Runner (1982). I was completely mesmerized within minutes by the cinematography, music score, sound design... all the technical awards should just automatically start inscribing BR2049 on the name plates. Set 30 years after Blade Runner Rick Decker (Harrison Ford) disappears, an LAPD Blade Runner, Officer K (Ryan Gosling) is placed on a mission to find Decker because he's the literal key to an important missing link that was recently discovered, which could destroy the so called system of order, or rather, the wall, between humans and replicants.

The replicants are synthetic humans created strictly for slave labor, and there are older model replicants that need to be destroyed. They have been replaced by newer models that are more obedient to the demands of humans. After Officer K kills one of those Nexus model replicants, he uncovers a well hidden grave site that opens a pandora's box of world changing truths. However, the organization that creates replicants learn the truth discovered from those buried bones and are desperate to find Decker. Blade Runner 2049 explores the question, 'Do AIs have a soul'? We certainly see in BR2049 that they are more human that humans in this world, and yearn for the truth to come out so that they can use that information and take control of their own destinies.

Director Denis Villenueve's beautiful, almost meditative journey through an otherwise dusty and dreary landscape makes this 2 hours and 44 minute film go by so quickly because you lose yourself in its beauty, and the anxious moments watching the twists and turns to the climax of this fantastic exploration of human greed, abuse, and oppression over the artificially designed.