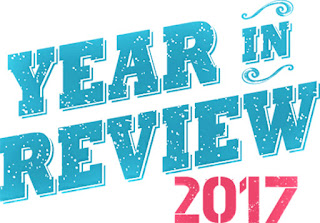 As 2017 comes to a close, I want to acknowledge some of the highlights and low lights of this year that have happened to me. You know the saying, what doesn't kill you, just makes you stronger, and I end this year a stronger person!

I started this year off just being in Los Angeles for a couple of months. I had a starter job that I took just to be working in my new home state. It soon became a job I desperately wanted to leave, and thankfully, I was able to not only find a new job in late March, but at a place very close to home. You are extremely lucky to live in the Los Angeles area and have a short commute to work. It's a blessing really. But yet again, as I realized my first year in LA would be a year of transition, the second job wasn't much better, but at least it was more manageable than my first job. Knowing the job search in So Cal is like having a full time job because it takes so much time to look for suitable jobs to apply to, and make yourself available for job interviews, often at a distance to travel. The chess game of  thinking of persuasive excuses to come in later to work or leave early, or take a longer lunch, really tests one's level of creativity, and acting abilities. After wasting a LOT of time with interviewers/companies who played unprofessional games, and dead end/black hole interview processes, I was able to land a nice contract assignment at an employer I have been wanting to get into since I moved to LA. This company works exclusively with select agencies, and after a CIA level background check, once you are accepted for an assignment, you have your foot in the door to be hired permanently when the opportunity arrives. I have literally found the company that I want to retire from. Short of having a company that is part of the entertainment industry ring me up and offer me a job, I don't need to apply for another job at another company again. I'm set. So, thank you to the universe for throwing this opportunity my way.

Although my goal of getting a paid job in the entertainment industry did not pan out - far too many games and it being very competitive, I will be fine with continuing volunteer opportunities and participating in film festivals as side hobbies. In a blog post I'll write later this week, I have the Palm Springs film festival and gala that I'll be attending this week. Meanwhile, I'm waiting to hear back from the Film Independent people to see if I have been approved to be a volunteer with them this year, which will allow me to work at the Spirit Awards in March in Santa Monica. I worked with the group of people who will decide my fate at the LA Film Festival. I can be a part of the entertainment industry in a creative capacity that will allow me access to events that I could have only dreamed of when I lived in Michigan.

Another great thing that happened in 2017, in my new home of LA, are the concerts and events I was able to attend. I saw some great shows at the Hollywood Bowl and at the Rose Bowl. I saw U2 and Depeche Mode for the first time in 16 years! I last saw these two bands back in 2001 when I lived in New York City, way on the other side of the country! I also saw Coldplay give the best concert I have seen in years, and sadly, but fortunately, I was able to see Tom Petty for  the first and only time on September 23. He would die just a week later from cardiac arrest. This year also saw me achieve credit worthiness at a level which allowed me to open up much needed lines of credit so that I can have more flexible spending to meet personal and professional needs. A new credit card allowed me to buy a $650 Hamilton ticket for my birthday in September. Membership is indeed priceless.

I saw a lot of movies this year, and a few of them were at special screenings where Q&As occurred. My favorite film this year was Call Me By Your Name (CMBYN) - be warned, I will be writing a lot about this film this coming awards season. I have seen it three times so far, and in the new year, sometime in January, I'll see it for the 4th time. The last time I saw a movie at the theater three times was The Silence of the Lambs. CMBYN resonated with me and affected me personally in so many ways that it's hard to describe or share. All I'll say is that it's a beautiful love story that came at a time where I have been exhausted by all the evil that is going on in the world, everyday political news, and my own personal struggles with my mentally and physically exhaustive job search. Love does cheer a heart up and I'm so in love with CMBYN.

I will be very active here at Theatre of Zen in the coming months as I prepare to write about my volunteer experience at the Spirit Awards, my voting abilities for the Spirit Awards, and the upcoming Golden Globes and Oscars, and the awards between those two. It's pretty clear to me that I moved to a city that will allow me to fulfill my professional career and ambitions, as well as allow me to pursue my creative interests in support of the entertainment industry, and I'm excited to share my experiences with my readers!