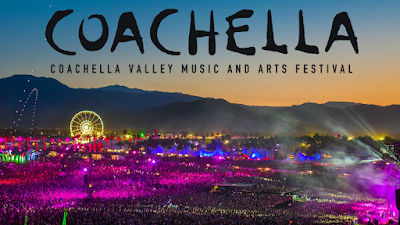 As an update regarding my recent visit to London, I had the most fun, it was such an awesome trip 'home' to London. I hung out with friends, did some carefree shopping, saw a great play, and, really enjoyed myself at the historical event of attending the royal wedding of The Duke and Duchess of Sussex! I was especially pleased with my flight with Virgin Atlantic and I can't wait to fly with them again. Due to my being so busy in London, the jet lag took a few more days longer than usual for me to recover as I had to go back to work the day after I came back home.

I don't have any other major plans for the rest of the year, so this will give me time to save up for Italy next year, and today, I was one of the lucky ones to buy a Weekend One pass for Coachella 2019! I can't believe I'm going! Just this past Wednesday, I read a tweet from @Coachella announcing that the 2019 pre-sale would start at 11am PST on Friday, June 1st. I have always enjoyed reading about the events and adventures of the Coachella shows and especially while I was living in Michigan, it was a dream that once I got settled in SoCal, to try to go to Coachella, if at least on a day pass. And with the 2019 Coachella being it's 20th anniversary, I think it's going to be an extra special music festival.

I had the past two days to plan my Coachella experience. I immediately knew I wanted to go to Weekend 1, which is April 12-14, so I booked a hotel in Palm Springs for those days. Hotels very close to the shuttle lot were already booked, so I was lucky to get a hotel just an 8 minute walk down the road from the drop off lot. The VIP pass was just too steep at $999 for a first timer like me, even with the 7 month payment plan, I just couldn't justify paying that money. So I opted for the General Admission pass with the shuttle at $499. I also wanted a poster which was $15, and I went back and forth in deciding if I wanted to splurge on Saturday night of the weekend to attend the Outstanding in the Field desert dining experience at $255. It's basically a gourmet 4 course meal served in the VIP Rose Garden (which I'll have access to all day Saturday). I figured, why the hell not? So my plan was to purchase these for my first Coachella experience.

Thank God my work load on Friday was medium and my immediate supervisor was out of the office. I anticipated that it would be crazy getting tickets, but I did not think that I would wait in the queue for 1 hour 57 minutes and 28 seconds to buy my package. To my amazement, once it was my turn, it was a breeze to make my selection and I checked out in less than 3 minutes! I was so thrilled, I tweeted about it immediately and I had to go take a walk to calm down and release the anxiety of the process. It appears that Weekend One sold out just minutes after I placed my order because people were tweeting just seconds after me that they waited for 2 hours only to have Weekend 1 be sold out, and they were livid. Whew! I'm glad that whatever karma I had stored up, it covered me today. As I write this update, tickets for Weekend 2 are still available. Update: Weekend 2 is now sold out.

I have said this before, but there was many a time while living in Michigan where I was simply not able to enjoy the most basic form of entertainment, besides going to see a matinee on a Sunday morning. So to be living in Southern California, the epicenter of the entertainment world, I'll be damned if I deny myself the pleasure of at least experiencing a festival event of this scale. I'm making up for lost time and I don't feel guilty at all! I deserve this.

Lastly, this evening, I pulled the plug on a message board forum that I created in early 2017 in support of Meghan Markle as she transitioned from little known actress to HRH Duchess of Sussex. It has been a thrill following her through all that time, but the community was stale and was losing interest, and I did not make friends there. So I closed it down today and I have taken a pledge to not create another fan community forum again. I will happily just be a member of an established community and give my POV when I feel like it.
Posted by Theatre of Zen at 11:11 PM