Quick Film Review: Once Upon a Time... In Hollywood - Grade (A-)

#OnceUponATimeInHollywood is a tribute to Sharon Tate, in what should have been. A cool visit back to Hollywood 1969 where an actor and his stuntman friend, DiCaprio & Pitt, prepare for has-been days. Tarantino's fairy tale revision is the redemption we need these days. Grade: A- pic.twitter.com/dU2TjeXrBA

Posted by Theatre of Zen at 5:34 PM No comments: 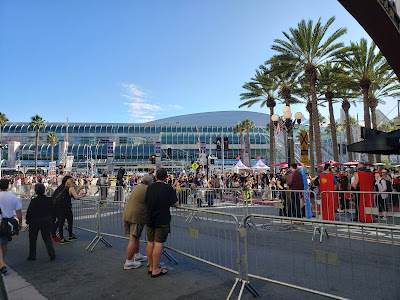 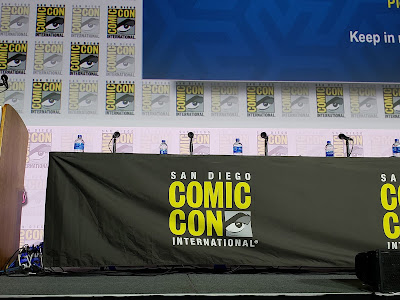 While I was living back home in Michigan, every July for the past eight years or so, I closely monitored the Twitter updates, and media articles about all the activities related to the San Diego Comic Con (SDCC). I knew that once I moved to California, I would have to try to attempt to attend one day. In late Spring of 2018, it was revealed that a sci-fi project that I was very familiar with, Dune, was going to have a new adaptation done by one of my favorite directors, and it was going to star Timothée Chalamet. Once I learned this, my interest in getting personally acquainted with Comic Con immediately took on new urgency.

I registered with Comic Con in July, and waited for badges to on sale in November. The first round of sales is a pre-sale that occurs in late October, for those who attended the most recent Comic Con, it's a head start on those who skipped the most recent con, and those who have never attended, or haven't attended in a while. Thankfully, in early November, I was able to buy a badge for the Friday and Saturday. Although when I was granted access to the site, all 4 days, including the preview day was still available for purchase, I only wanted to do two days to start. Now after attending my first comic con, I will add on the Thursday, so I can have more time to visit the exhibit hall and off-site activities.

I arrived in San Diego around 3:30 pm. Checked into the hotel that I won the lottery for - Hampton Inn San Diego Downtown. It's along the Pink shuttle line, but it's an easy 28 minutes walk (for me) to manage. The shuttle takes approximately 30 minutes. I walked around the San Diego Convention Center to familiarize myself with the logistics of the convention, as well as the off site activities (which I unfortunately was not able to take advantage of). I did have a Stranger Things fan party to attend, and luckily I was one of the first ones there and got in rather quickly and easily. I hung out for just over an hour as I had planned. Needed to get back to the hotel to be well rested for my first Comic Con day.

After collecting my lanyard, comic con guide, and bag, I proceeded to the rest of the Exhibit Hall and to say I was overwhelmed is a serious understatement.

It is stimulation overload when I first entered into the exhibit hall. You just let your eyes guide you and your feet take you where you naturally gravitate towards. It's similar to shopping at a mall, the weekend before Christmas with a very specific list of things to buy and only so much money. My eyes glazed over many of the fabulous exhibits there as they were interesting, but since I was not a fan, nor familiar with the product, it was easy to just look from afar with a smile and I kept moving to the next exhibits. I would say that the majority of loyal SDCC attendees are such hardcore fans, that at least 80% of the exhibits there will appeal to them. For me, I would estimate that maybe 30% of the exhibits appealed to me. And that's fine because of that 30%, those exhibits had 110% of my attention. I put so much money into the badges, which is like $70 per day, I spent approximately $110 on pre-sale items, and the hotel and parking fees, that I had a strict $100 spending budget for the exhibit. My total comic con trinkets spending wound up to a mere $62. Huzzah! This includes reimbursing my GA who nabbed the last remaining Dune boxes for us while I was trapped in Hall H.

I participated in a Star Trek Discovery 'beam up' exhibit, which was a lot of fun. But for this ONE activity I wanted to participate in at 10 am on Friday morning, I waited in line for about an hour. This was OK, it goes with the territory. Star Trek has a lot of fans and it's just something that you do at Comic Con: wait in line. But I have my limits, and there are only so many hours in the day. Can you imagine waiting in line for 1-2 hours for several exhibits each day of the con? That's why people attend all four days so that they can play the wait in line game for as many exhibits as possible. That's fine for some people, but thankfully for me, I'm only interested in doing this for a select few exhibits, and Star Trek was the only one worthy of my line waiting attention this year. Now, had Warner Brothers been on the ball and had Wonder Woman and The Joker at their exhibit, instead of focusing on their TV shows I don't give a damn about, I would have lined up for them. Warner Brothers is expected to return to SDCC next year, as they are the studio for Dune (hint), and to properly introduce Robert Pattinson as the new Batman.

By 1 pm, I was loaded down by stuff I collected, so I headed back to my hotel for a breather before I dealt with the line for Ballroom 20, another conference room for popular panels that is a beast to get into. The new Amazon Prime series, Carnival Row, starring Orlando Bloom was scheduled at 4:45. After my break, I headed back to the convention center to get in line for Ballroom 20. This is a 3500 seat auditorium, so it can fit half of Hall H. The most popular and highly anticipated TV programs are presented in this conference room. The line was quite impressive and when I was directed to the end, I was exasperated. But alas, I was informed by one of the volunteers that this line was nothing and that I would definitely get in. So word to the wise, if you plan on attending Comic Con in the future, and don't like the length of a line (other than Hall H), don't let that concern you too much, just ask volunteers around you and they will assure you that you'll be able to get in. If not, they will also tell you so. I had a good seat in Ballroom 20, just one seat off from the aisle (my preferred seating). I could see the stage clearly, but had to rely on the large screen for up close views of the faces of the people on the stage. We saw several impressive clips for Carnival Row, cementing my interest in seeing this show when it comes on in late August.

After I left Ballroom 20, I went into the exhibit hall once more realizing the Saturday was going to be monopolized by Hall H, so I quickly walked through it again to pick up a few more things. My suggestion about how to navigate the con is to ID the exhibits you MUST participate in and plan to wait in line for however long you desire. Then after that, walk through the con per each zone, directly in the middle of the path, looking left and right to see what's on both sides. Some exhibits that weren't on your radar may stand out, and you go there and you may find something that you didn't realize you wanted. It's all about pacing yourself and know what you like. If you don't READ comic books, there's no need to go to the comic book section. If you love limited edition comic art, then focus on that section and look for interesting art to buy. If you NEED a Funko exclusive, enter the lottery and hope you win. I entered autograph signings and exclusive lotteries and didn't get a thing. So, that saved me money.  I left the exhibit hall around 6:30 to go get dinner in the Gaslamp area. I was back at the hotel by 8:30 as I needed my rest to get up early for my Hall H adventure. (more after the cut)

#StuberMovie was pretty funny. Reminded me that I don't see comedies in the theater much. This is a new twist on a cop/buddy theme. Standard police department drug gang mole plot, and an unlikely hero who had to man up at the right moment. Grade: B pic.twitter.com/qT7biJst2y
— Simone Cromer 🦋 (@TheatreofZen) July 14, 2019

Posted by Theatre of Zen at 8:18 PM No comments: