#AdAstra is a thrilling, suspenseful intergalactic drama where a stoic astronaut eventually realizes that his love for life & humanity might save all life if he finds his father on an insurmountable trip to deepest space. Great work from Brad Pitt to secure Oscar nom. Grade: A pic.twitter.com/5gBJoK9yFG

#ITChapterTwo was filled with entertaining, but cheap scare tactics that grew very tiresome over its 2 hrs 50 mins. Present and past tense horror histories of each of the 7 losers dragged out a weak story. Bill Hader stood out. Brutal child murders difficult to watch. Grade B- pic.twitter.com/RALVMYthTc
— Simone Cromer 🎬 (@TheatreofZen) September 6, 2019

Timothée Chalamet attended the Venice Film Festival for the first time on September 2nd for his his new Netflix film The King, which had an Out of Competition World Premiere there. So far, he has earned raved reviews from Variety, The Hollywood Reporter, The Playlist, Vanity Fair, The London Times, etc. The film will debut in theaters on October 11th and then air on Netflix on November 1st. I'm really looking forward to this freshened up Shakespeare play. While I'm not the most well versed when it comes to Shakespeare's Henriad group of plays covering Richard III, Henry IV (Parts I & II) and Henry V, which is the young King that Timothée plays. It's been noted so far in some reviews that it takes an actor of Timmy's stature to pull off playing such a young King and apparently he does it very well. I for one can't wait to see The King in theaters here in the LA area and repeat viewings on Netflix. If Timmy makes the cut to participate in his third consecutive awards season, then so be it, and I'll continue to do my job at Club Chalamet to support him!

Two other important things to note is #1, that suit!!! Timmy was the talk of town on Monday and Tuesday with his beautiful silk grey suit from the Haider Ackermann 2020 Spring Collection. With Timmy's lithe model like stature, he was the perfect celebrity body to introduce this elegant beautiful suit to the world! Read this fashion review at Paper. 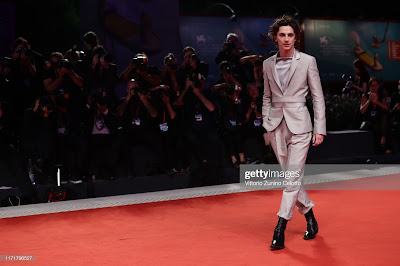 And #2, what I was really looking forward to was seeing Timmy and his reported girlfriend, and The King co-star as his future queen Catherine of Valois, Lily-Rose Depp, on the red carpet together. Although they did not deliberately pose together for photographers, they were close enough to be in a few shots together and making them look like the perfect young royal couple. Yeah, I know, that's cheesy, but they are cute together, periodT. I think this was dictated by PR as to not flaunt their relationship in front on Timmy's fans. Sadly, many of his fans are very sensitive about his personal relationships and his private life. Anyway, both of these kids are half-French and speak the language fluently, and get along well, so, why not just support them and be happy that they're happy? Isn't the world messed up and dark and ugly enough as it is to not be happy for your favorite actor and his private life? If you aren't, then you need to re-evaluate a few things in your own life. Timmy looked BEAUTIFUL, not handsome, he's beyond that, he's beautiful, and Lily-Rose looked gorgeous in her pink Chanel gown. 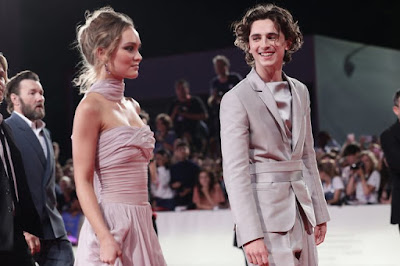 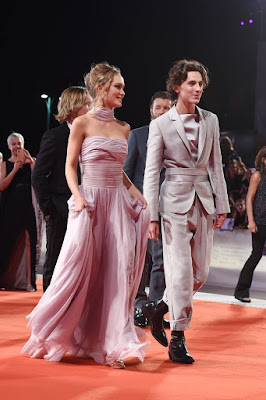 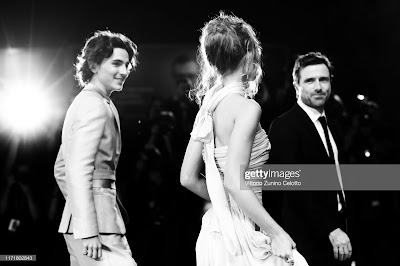 The next festival stop for The King is the BFI London Film Festival. I don't know if Lily-Rose will be there, but she should and I can't wait to see what they wear there!
Posted by Theatre of Zen at 6:28 PM No comments: