Two weeks ago, I never would have dreamed that I would witness a blood prince and his new American wife stepping back from their senior royal status, to live part-time in Canada in order to escape the debilitatingly rude, destructive, and relentless racist attacks against the Duchess of Sussex, Meghan Markle. I don't have the stamina or interest to rehash everything that has been made public, but it is the things that are being hidden from the public that makes me raise an eyebrow. With all the negative crap that the "Royal Rota" aka British tabloid press has printed to defame and humiliate the Duchess, it begs one to wonder, where are they getting these lies and misinformation, and why are they so obsessed with tearing down this woman?

Based on the fact that Harry is leaving his full-time royal status, this means that most likely the source of so much angst is coming from Kensington Palace and from the three people who have the power and influence to stop all this: The Queen, Prince Charles, and Harry's big brother William. I believe that due to Meghan's natural charisma and go-getter positive attitude, the public has taken a huge shine to her and the media, loving and hating her, is completely obsessed with her to the point that it has rankled the British royal family. This newcomer American girl Duchess did not stay in her quiet and meek lane, and a secret cabal was established to bring her down by any means necessary. But alas, the fools didn't realize that her knight in shining armor, Prince Harry, would go with her.

From their official website Sussex Royal, here is a portion of their statement released in early January 2020:

“After many months of reflection and internal discussions, we have chosen to make a transition this year in starting to carve out a progressive new role within this institution. We intend to step back as ‘senior’ members of the Royal Family, and work to become financially independent, while continuing to fully support Her Majesty The Queen. It is with your encouragement, particularly over the last few years, that we feel prepared to make this adjustment. We now plan to balance our time between the United Kingdom and North America, continuing to honour our duty to The Queen, the Commonwealth, and our patronages. This geographic balance will enable us to raise our son with an appreciation for the royal tradition into which he was born, while also providing our family with the space to focus on the next chapter, including the launch of our new charitable entity.


In the coming weeks, we should learn more about exactly how much time the Sussexes will spend in Canada and in the UK, and which if any patronages they have will remain theirs. It's my hope that they retain their HRH status and their patronages because Harry and Meghan love their work and responsibilities to the charities they support, and it would not be fair to them or the charities/patronages throughout the Commonwealth if gears were shifted and reassignments occurred. Because of their commitments, they can create a working schedule that will allow them to continue supporting their patronages, and it will continue to reinforce that the Sussexes are here to stay and are serious about supporting the monarchy.

A tweet I posted today (seen below) has gone viral and I'm quite pleased that so many people support what I posted. I have been a supporter of William and Kate since before they married, and I have been disappointed in both of them in how they have not managed this situation. As the future King and Queen, you'd think they would set an example by making a short announcement of support and love for Meghan and attacking the bullying she has been receiving. But like the old adage, 'silence speaks volumes', and through their silence, they condone this attack against the Duchess of Sussex and are reaping the benefits as they enjoy the positive stories and media attention directed at them. The difference in the reporting about them is literally night and day and you have to be either completely dense and ignorant, or a racist to not see what the UK media has done, and will continue to do to Meghan.

I just unfollowed @KensingtonRoyal. In light of what has happened to #HarryandMeghan, I cannot continue to celebrate and honor #WilliamandKate as I believe they watched, leaked misleading information and lies, and benefited from the racial harassment of the Duchess of Sussex. 🇨🇦
— Simone Cromer 🎬 (@TheatreofZen) January 15, 2020

As additional evidence of the double standard that Meghan has faced in comparison to Kate Middleton, see the headlines below. Just unbelievable! 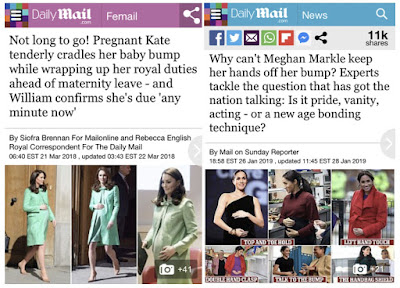 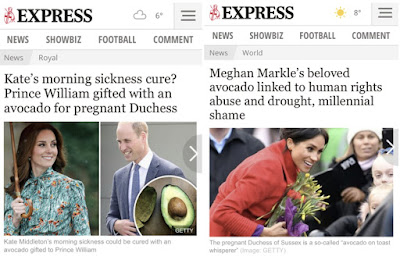 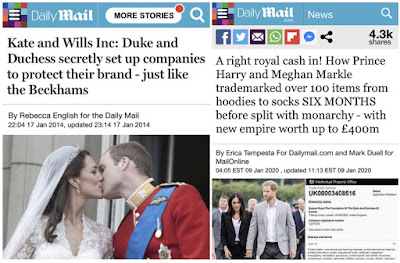 Anyone with critical thinking skills and human compassion can see that the British tabloid media has had Meghan in their crosshairs for over three years, and it has taken its toll on her and Harry. This unfair treatment has to have been sanctioned by someone or some persons high up the royal family or who work closely with the royal family. For no one in the Kensington Palace to not speak one sentence condoning these attacks against Meghan leads a sensible person to believe that this has all been orchestrated to run her out of the family. But, there's true love between Harry and Meghan, and this bullshit has only brought them closer, and they'll be a stronger #TeamSussex in the end.