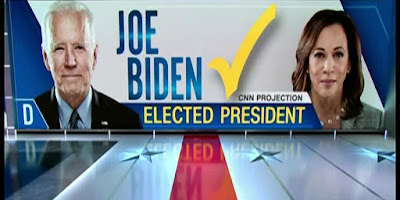 A week ago, my last blog post ended on an optimistic note in declaring that Joe Biden and Kamala Harris would be elected. I wrote the following:

I believe in my heart that Joe Biden and Kamala Harris will win the election. We as Americans are at the precipice of where we will tell the rest of the world exactly who we are. The majority of Americans are good human beings... - ToZ 1 November 2020

After four sleepless nights, I woke up Saturday morning under the benefit of living in Pacific Standard Time here in California, at 7:15am. After making breakfast, I turned on the TV to CNN to see what happened overnight. I saw the same electoral vote tally from the previous evening, however, CNN was just about to receive the latest numbers from the key state of Pennsylvania. Not 10 minutes later, after Joe Biden earned another 3,000 votes, CNN's Wolf Blitzer announced that CNN Projected Joe Biden as President-Elect. I watched this historic moment live, something that I have been waiting for 4 years to witness! See the historic announcement moment below.

Just as Wolf was positioning himself to make the announcement, I knew he was about to call it and I just stood up to listen to enjoy every second of this live historic moment. I started to jump up and down and I was squealing and yelling, just so overjoyed and relieved!!! It was so surreal because it was something I have been thinking about and wishing for many years, and my prayers and the hard work of nearly 75 million Americans paid off.

Throughout the country, millions of people partied and celebrated in the streets. It's as if it was destiny that this news would break early on a Saturday morning, allowing people to celebrate for the rest of that day as if it were a holiday. More impressively, as news spread around the world, human beings of good conscience also celebrated with the Americans, and leaders from our ally nations reached out to President-elect Joe Biden and Vice President-elect Kamala Harris to congratulate them. The world breathed a sigh of relief along with the Americans who voted for Biden/Harris. I'm not going to waste font space on the opposition, all that matters is that the people voted in record numbers and decency and compassion prevailed. This is the one grand thing from 2020.

May our nation now begin to heal after this horrible nightmare!