My trip to Tempe to go to the Cinema!

In this horrible year since the closing of theaters in March due to the pandemic, I have seen 5 films in a theater since the spring. Under normal conditions, I would have seen at least 40 between March and December, but I only saw five, and two of those films were seen just this past weekend. As a treat to myself since my travel plans to see family during New Year's Eve weekend has been canceled, I decided to drive to the city closest to me that has theaters open, and that honor goes to Tempe, AZ. I was just in Sedona in September after Labor Day, so I was excited to travel to AZ again.

Theaters are closed in California, and for a change of scenery, especially since I was traveling solo, I felt it was safe enough for me to drive, solo, to Tempe, and stay in a nice hotel, solo, while venturing around town, solo, wearing a mask. I know there has been a lot of news reports about the dismay of public health officials lamenting the fact that people are not adhering to the guidelines of staying home to help prevent the spread of the virus. And for the most part, I wholly agree with that. Especially when you have multiple people who are family or friends flying on planes to go see relatives at the height of the worst part of this pandemic.

This is why my trip to Michigan was canceled because it wasn't safe for me to travel. So I get all that, and that is why I felt totally comfortable in my decision to drive to Tempe on Christmas day with low traffic, to stay two nights at a Hilton with the primary purpose to see movies at Cinemark Mesa 16, which was a beautiful theater that had strict Covid-19 sanitation information posted all around the theater.

Below are the quick film reviews of Promising Young Woman and Wonder Woman 1984. First and foremost, both films were so great to experience in the theater and it solidifies my smart decision to treat myself to this special short trip. Now more than ever, I believe it's imperative for us all to support watching films in the theater. It is safe.

#PromisingYoungWoman was fucking excellent!!! The Avenger of toxic masculinity and white male bro privilege. Carey Mulligan's character was haunted to honor her best friend and just when you thought she wouldn't succeed, she does so with sublime calculating brilliance! A++

To elaborate a bit more on Promising Young Woman, this is a story of a former medical student who quit school to support her best friend who was sexually assaulted by fellow male students. Cassie's friend Nina suffered terribly from this devastating attack, and it also affected Cassie, brilliantly played by Carey Mulligan. Promising Young Woman is a story of revenge plotted to avenge a friend, and destroy the toxic privileged male fraternity bullshit that is so rampant and protected. I was shocked and horrified by the end result of the film, but also applaud the surprise ending, it really was a shocker and goes against all conventions in movies about the protagonist. It's bittersweet in the most bitter of ways. But if you're like me, you will be sad and satisfied. I'm so glad I saw this in the theater, but I get bummed out in knowing how denied I am in watching this very film with a Los Angeles audience of my peers of voters and critics. And of course, the Q&As that are so common in the LA market for the awards season. I've seen Carey Mulligan in person back in 2018 for Wildlife, but I would have killed to see her at a Q&A for PYW. I will be participating in a virtual screening of PYW in two weeks via Film Independent, but as you know, that's not the same. But I am looking forward to watching this wickedly smart and brilliant, timely film again. Carey Mulligan won the Best Actress honor for the LA Film Critics Awards two weeks ago, so that's a good sign that she's deservedly on Oscar's radar.

The primary reason why I drove to Tempe was to see Wonder Woman 1984. In the aftermath of the crazy decision for Warner Brothers to release WW84 in theaters and on HBOMax at the same time, there was just no way I was going to watch this very film in my bedroom, all by myself, on Christmas day. No fucking way! I was going to drive 360 miles and pay $14 to see it, and it was worth every drop of gas.

Now I know why Steve Trevor is in #WonderWoman1984Be careful what you wish for because it comes at a cost that even hurts Wonder Woman. Jenkins and Gadot puts heart into a super hero battling against Pascal's Trump like greedy maniac in a spectacular and exhilarating ride! A-

I really enjoyed Wonder Woman 1984, and a superhero film is best seen on the big screen the first time you're able to see it. I don't understand the hate for WW84 that can be seen on Twitter, but most of the haters are guys and fans of Marvel. So make of that what you will. It's almost as if they are taking joy in wanting to slam this film. It's a superhero movie based on the outrageous greedy consciousness of the 80s, and it had great special effects and action scenes. It was just a lot of fun and I think the pandemic has made some people particularly dark and bitter and they just didn't want to like WW84. But alas, Warner Brothers, perhaps in an attempt to sow good favor for themselves in the aftermath of the past two weeks with the revelation of the plans for the 2021 roster of films to be released in some theaters AND on HBOMax, the studio announced today that they have given the green light for Wonder Woman 3. So that's great news as I love Gal Gadot as Wonder Woman and Patty Jenkins as the director.

I don't know when I'll be able to go back to a theater again, but it felt really good and safe going to AZ to watch these two films. I don't think theaters will open up in CA until perhaps May, and this is based on how soon more people can get vaccinated in the months between Feb-April, which is the time frame I expect to be vaccinated as I work in the healthcare industry and I am considered an essential worker. But as long as theaters are doing the innovative cleaning like Cinemark, and Harkins Theaters are doing at the height of the pandemic, along with social distancing in the theater, I welcome the opportunity to go to the theater again here in SoCAL as soon as possible.

I hope to resume updating ToZ more regularly as I watch more films on screeners in the coming months for the awards seasons, so please keep coming back here.

Posted by Theatre of Zen at 9:41 PM No comments:

George Clooney's #TheMidnightSky began with such vagueness about a global catastrophe that it was a little hard trying to follow where it was leading to. But in the end, the dreariness allowed the human spirit to shine through and offered slight and bittersweet hope. B+ 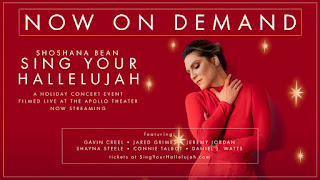 This Christmas, bring some cheer right into your living room with Shoshana Bean and friends in 'Sing Your Hallelujah.'

The holiday season is different this year. Due to the pandemic, audiences cannot see popular Broadway Star and Billboard #1 recording artist, Shoshana Bean in concert singing favorite holiday songs. However, in 'Sing Your Hallelujah', a virtual concert directed by Amy Segal (Schitt's Creek: Best Wishes, Warmest Regards), Shoshana shines in this concert special, recorded on stage in the beautiful and historic Apollo Theater in Harlem. In between the beautiful stage sets accompanied by an accomplished arrangement of acoustic musicians supporting Shoshana and a variety of guests singing, Shoshana laments very candidly about how New York City and the world has changed due to Covid-19, and the subsequent mandate lock-down guidelines of social distancing.

As the holiday season approaches and revealing in the relief of the announcement of the Biden/Harris Presidential win, Shoshana and friends are inspired and realize that they have a unique opportunity at hand to perform. Although Broadway is still closed down, the show must and can go on, but on a smaller scale by, virtual presentation. Behind the scenes socially distanced rehearsals reveal how much all the talent have a love and respect for each other and are committed to uniting the community through the spiritual power of their voices in the Christmas songs they sing.
Joining Shoshana in 'Sing Your Hallelujah' in a variety of excellent performances are Tony-winner Gavin Creel, tap dancer Jared Grimes, Broadway star Jeremy Jordan, singers Shayna Steel, and Connie Talbot, and Tony Award nominee Daniel J. Watts. Together, each performer is on stage solo or with a duet with Bean bringing much-needed holiday spirit into the homes of viewers. Bean in particular has an absolutely amazing voice that embraces you with the love she wants to share this Christmas. Extra meticulous care went into designing a stage presence that gives the appearance of a concert that is intimate and in your home, bringing that community spirit close to you when these socially distanced days make one yearn for that very closeness.
Everyone involved in this production explains in their own way about their connection and friendship with Shoshana and how they felt compelled to be a part of this spiritual concert as it is something that they needed to be a part of in these unusual times. Director Amy Segal presents a holiday musical experience that is beautiful, introspective, and meaningful in giving people something special that they need and will cherish this holiday season.

Posted by Theatre of Zen at 8:06 PM No comments: