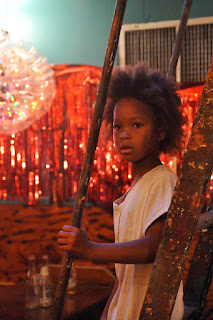 The film that I am anxious to see is Beasts of the Southern Wild, and I will see it on Saturday at the Michigan Theatre, probably the 7pm showing with a friend.  This festival darling film has been hot on the tongues of many cinephiles for several months now. I'm sure I will like it and will have my first official pre-Oscar film that I can legitimately discuss. I say this because I have been one of many who sprout off at the mouth about the Oscar chances for films I haven't seen, or care too. It's human nature to get into pissy verbal challenges, but because of this blog, I have to demonstrate more professionalism and cred, and take my ass to see films that are going to be talked about throughout awards season.

Here is a synopsis of 'Beasts' courtesy of Covering Media:
In a forgotten but defiant bayou community cut off from the rest of the world by a sprawling levee, a six-year-old girl exists on the brink of orphanhood. Buoyed by her childish optimism and extraordinary imagination, she believes that the natural order is in balance with the universe until a fierce storm changes her reality. Desperate to repair the structure of her world in order to save her ailing father and sinking home, this tiny hero must learn to survive unstoppable catastrophes of epic proportions.

This week we saw the announcement of the first 60 film titles that will screen at the Toronto International Film Festival in September. Over at Awards Daily, they are very excited about quite a few films that will be showing at Tiff. And today, Sasha posted Dave Karger of Entertainment Weekly, his top ten film picks. Then she posted hers. Film titles with an asterisk are what I am to see. I'm sure to change my mind and reconsider some of their picks. Note that they do not mention some films I am eager to see, these are specifically the Oscar baity films for now.

As you can see, Dave's taste in films mirror my own, but that is not to say that everything that Sasha listed is not good. I may in fact see many more. However, once the official film list comes out featuring over 250 films, I will have the most difficult time of deciding which 10-18 I will see. I will be in town from opening night Thursday through early Wednesday the following week. A good chunk of time, BUT, I have other interests around Toronto that will prevent me from seeing more. The thing about tiff is that even a cinephile like me has to have a perfect balance of watching films, star gazing, enjoying Toronto, and being with friends. I will do all in a fine balancing act.


Ghetto Gossip of the Week

As it is Friday, there are two ghetto gossip stories that bugged me this week. As ToZ is still a new blog, I'm thinking of themes that will be regularly featured here. Ghetto Gossip will be discussed when celebrity gossip occurs that just annoys me to the marrow of my bone in ridiculousness and outrageousness. The two ghetto gossip stories this week are regarding the Saga with the Jackson family and Michael Jackson's beloved kids, and the bullshit sexism against Kristen Stewart in her "apology" to that Pattison guy for "cheating" on him with her Snow White director. Sigh... where do I start?

Firstly, I will say once more, that I do not believe that Kristen and Robert were ever real boyfriend and girlfriend. It's all been PR to promote the film. I will never understand why the studios insist on matching up film leads in faux relationships, but more, I will never understand why people fall for it time and time again. What concerns me is the harsh treatment this girl is now receiving from even people who proclaimed their love for her. In light of this cheating scandal, it demonstrates just how much people place value on PR created relationships and use that, and only that, as a gauge to like a celebrity or not, and go see their films. It's sadly disgusting and disturbing. What ever happened to just enjoying a film and just liking actors/actresses for their talent, not in whom they sleep with? What's worse is that "grown men and women" are calling Kristen foul names, and that is just terrible. I'm no fan of the girl, but cripe, I'm really horrified by what I have been reading from people about her. Stay away from reading up on this story at usatoday.com because the crazy may come to get you through your computer screen!

Secondly, the situation with Katherine Jackson mysteriously and suddenly taking a "vacation" to Arizona, and not even telling the CHILDREN that she is the guardian of, where she's going, and not being in contact with them for days, is just strange. What has been played out in the media looks like a highly dysfunctional family that really don't seem to genuinely care for the grandmother/mother, Katherine, and Michael's three kids. I'm also pleasantly surprised by how articulate the two older kids have been in expressing their anger and concern over their missing grandmother (who has now returned to California), and the behavior by their aunts and uncles. I think everyone knew the Jackson's were a crazy family, but they certainly proved it this week. As of this very moment, the kids are with a cousin, TJ Jackson, who for the most part seems to be the most rational Jackson, and cares for the kids. The way this saga has played out this week qualifies it to be the most Ghetto Gossip of this week. Just shameful! Just for giggles and more gossipy reporting on this story, go to Dlisted, I love MK's style of writing about all this. The Wrap provides a glorious list of Who's Who in this ghetto mess.
Posted by Theatre of Zen at 11:42 AM