Complete Murdering Mayhem at Midnight Showing of Batman in Denver! 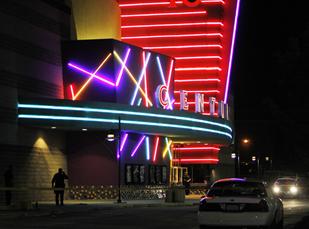 It has only been a few hours since the rest of the world learned of a horrific killing spree inside a theater in Aurora, Colorado (a suburb of Denver) during the midnight screening of The Dark Knight Rises. At the present, 12 (down from first reported of 14, per CNN) people have died and 50 people have been injured by a lone gunman, who has now been identified as 24 year old James Holmes. As per witness accounts, the gunman was dress in complete riot gear, with a helmet and bullet proof vest. He entered the theater from a front side exit, released two canisters containing a tear gas substance, and started to randomly shoot innocent people who were there to watch a movie. Just writing this all out feels as if it's part of a screenplay, it's unbelievable!

The media is in full force covering this, but I got the latest information from BBC News. And already, courtesy of Nikki Finke's Deadline blog, she has been the first one to dare mention how this tragedy will affect the weekend box office of the Dark Knight Rises. As off-topic and insensitive as that seems, it is most likely on the minds of Warner Brothers.

I will update this post with additional information and commentary as new information develops. I'm scheduled to watch the movie tonight, and I'm wondering how the events in Colorado will affect security at theaters across the country.

My thoughts and prayers are with the victims and the injured.

1st Update 9:27am EST: Cinemablend and French websites report that the Paris premiere has been canceled out of respect to the victims of  the shooting.  Both President Obama and Mitt Romney issued statements expressing condolences to the victims. Warner Brother has issued the following:

“Warner Bros. is deeply saddened to learn about this shocking incident. We extend our sincere sympathies to the families and loved ones of the victims at this tragic time.”

2nd Update 11:10am EST: The suspect's apartment has been found and police state that it has been booby trapped with explosives. The police could be at the apartment for days. The entire building has been evacuated, and the 3 block section has been cordoned off. This maniac planned this for a very, very long time! Read more at The Denver Post.

3rd Update 11:50pm EST: I just got back home from watching The Dark Knight Rises, there was a notable police presence at the theater and my 8pm screening was sold out. I loved the film and I will post the review this weekend. I found a statement by Christopher Nolan regarding the shooting:

“Speaking on behalf of the cast and crew of ‘The Dark Knight Rises,’ I would like to express our profound sorrow at the senseless tragedy that has befallen the entire Aurora community. I would not presume to know anything about the victims of the shooting but that they were there last night to watch a movie. I believe movies are one of the great American art forms and the shared experience of watching a story unfold on screen is an important and joyful pastime. The movie theater is my home, and the idea that someone would violate that innocent and hopeful place in such an unbearably savage way is devastating to me. Nothing any of us can say could ever adequately express our feelings for the innocent victims of this appalling crime, but our thoughts are with them and their families.”- Christopher Nolan via Variety