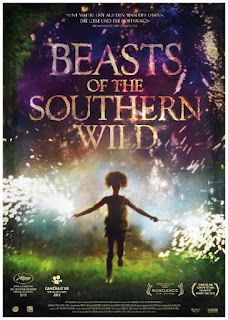 Rarely are there films that wonderfully blend the imaginary world into the harsh realities of a closed off remote society like 'Beasts of the Southern Wild' does. I went into watching 'Beasts' without reading any in depth reviews because I didn't want any spoilers or have another person's view of the film cloud mine. And I'm glad I didn't because the adventure that Beasts takes you on is so unique in that if just for those 92 minutes, you feel like as if you are living in The Bathtub, the fictional name of the little town in the Bayou region. This is a story about a precocious six-year old little girl name Hushpuppy, remarkably played by Quvenzhané Wallis, who lives in a makeshift home of tin and cardboard with her father, Wink, played by an excellent Dwight Henry. But before I go on, I must take a moment to acknowledge that these two actors are not professionals, and this movie is their first roles, so even by that measure, I was greatly impressed by how brilliant their performances were in bringing to life these odd characters.

As a way to escape her meager existence in this no-man's land region, Hushpuppy often talks to her deceased mother through a t-shirt she must have worn when alive. Hushpuppy fantasizes a lot and when she heard a folklore tale about giant boars, she imagines them coming to get her just as a hurricane is coming to her area and possibly destroying the Bathtub. The boars represent an impending doom in Hushpuppy's mind, and they run through the film towards her in a fashion that only a child can imagine. In what may appear as possible verbal and physical abuse, Wink is being harsh and 'straight-up' with Hushpuppy, just to prepare her when he's not around. And based on Wink's erratic behavior, we soon sense that he has an illness which there may be no cure. The residents of the Bathtub are happy to fish, eat, drink, and sing, until the storm comes. After the storm hits, they are still ok, but everything around them is underwater and destroyed, and their way of life is taking it day-by-day until they have to figure out a way overcome the affects of the storm.

This insular society does not like or trust the outside world, which we do not see much of, other than rescue workers coming to remove people from the Bathtub due to safety reasons after the hurricane. Everyone fights off The Man, but they wind up in an emergency shelter anyway. All through this, we see Hushpuppy being tested in ways that a typical child should not be, but she perseveres because she has to. She's guided by a curious nature that makes her strong willed and indefensible. She loves life and she loves to hear it through the heartbeat of animals and people. She listens for the heartbeat of a leaf before she eats it - she's in-tuned to the world in ways that other people, especially adults, are not. I cried towards the end, when Wink says "no tears", that's pretty much a cue to tear up dammit. This is a beautiful harsh film about a brave little girl who just wants to live life to the fullest, with both her parents in it with her.

Email ThisBlogThis!Share to TwitterShare to FacebookShare to Pinterest
Labels: Beasts of the Southern Wild, film reviews