This time tomorrow, I'll be at TIFF and preparing for the first screening of 17 films. I'm still trying to get one ticket to Seven Psychopaths, and I'm even considering replacing that with West Memphis Three, but they both are still "off sale". One person at the Awards Daily forum yesterday got lucky and was able to buy 1 surprise available ticket to Seven. WTF? So I keep going back to the tiff ticket sale website with hopes that one more ticket will be squeezed out.

Regardless, I'm almost packed, I just have to now sort out my mobile phone situation so I can have a phone in Toronto - I'm going to do that in a couple of hours after I get off work.

A cool article was brought to my attention by my tiff host Glenn, and I want to share it with my readers. Especially for those who have never gone to tiff, or believe they will never be able to attend, hopefully this article will give you an idea about why the Toronto International Film Festival stands out from all the rest! 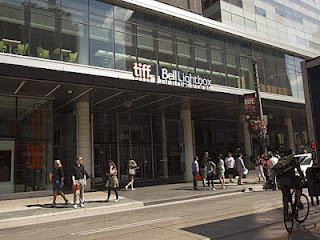 The Toronto International Film Festival starts tomorrow, and during the next ten days, celebs, film fanatics, and international critics will converge on the Canadian city to not only see movies—but to see and be seen by each other. To find out the hottest spots for hanging out and for hobnobbing with VIPs, we turned to Shinan Govani, Toronto's eminence grise of buzz. His daily society column in Canada's National Post newspaper is the first thing potentates and plebs turn to—and where they hope to see their own names in boldface.


How would you define TIFF?
It's at once one of the all-time great celebrity aquariums, an Oscar season kick-off, an all-you-can-eat cultural buffet, a big studio sniffing ground, and the kick off to back-to-school season—all set in one of the great hustle-bustle, multiculti metropolises around. If it was a film itself, TIFF would be a comedy of manners, a farce, and a thriller.

What are some of the highlights of the upcoming festival? I don't just mean the movies, of course.
With close to 300 films, and the accompanying human accoutrement that comes along with such a production—the stars from across the alphabet, the agents and the producers and the handlers, the fashion devotees and the n'er-do-wells, and the spousal up-graders—the people-watching, I must admit, is probably what I look forward to the most. While there is a kind of a playbook for how the fest unfolds to some extent (InStyle will throw a party here; CAA, the agency, will throw a party, there), some of the fresh hoopla will revolve around Elton John headlining the Fashion Cares [fund-raising gala for HIV/AIDS awareness] and also the ready-set-go of celeb ground zero Soho House, which is officially debuting with a space of its own in Toronto, in September.

What's the best elevator for a 15-second pitch to a Harvey Weinstein?
Harvey is everywhere at this time of year, so much so I've wondered how many clones he brings to town. He, dare I say, gets to as many parties as I do. The one time I got the most attention from him was at a small Vanity Fair cocktail party—Jon Hamm huddling in the background—when I asked him about his daughter with wife Georgina Chapman. He immediately got out his phone, and showed me a pic. But, then, just as quickly he was gone. He's like a snake in the grass, that one.

And if you want a side order of celebrity with your charcuterie, where should you go to eat?
Well, of course, Soho House as I mentioned: that'll definitely be a celebrity ground zero. But, otherwise, there are lots of different orbits, with the Fest having moved downtown and the city just generally having gotten bigger in terms of options over the last few years. A branch of be-all Momofuku is opening near the brand-new Shangri-La Hotel, so that'll definitely have an energy draw. There are other newer places to consider: the big-buzz Gusto 101 on Portland, for instance, or the serenely chic Edulis on Niagara Street, or the designer saloon-style eatery that is Weslodge on King West. Newish places that should see some action is Enoteca Sociale (where Justin Timberlake and Jessica Biel got to when they were kicking about Toronto a lot last summer), as well as the Harbord Room, an in-the-know spot where I spotted Jake Gyllenhaal just a few weeks ago. Some of the older-school places still get celebrity traffic, though, and shouldn't be counted out: think, for instance, Sotto Sotto on Avenue Road, or One in the Hazelton Hotel.

Tell us about some of the more memorable parties at recent TIFFs, and ones you're looking forward to this time.
Well, last year I had the opportunity to have dinner with Madonna (while in town premiering her film about Wallis Simpson)…does that count?! I have too many memories to keep track, but some of my favorite moments include the time Tom Ford, here throwing a party, asked me to smell him (long story), another time when Liza Minnelli sang to my face (doesn't require that much explanation), and I had an actual convo with Johnny Depp about Oompa Loompas. As for what "parties" I'm looking forward to the most, I must confess that what I look forward to are "moments" more than parties, as the parties all meld into one another (after going to about 50 in a week!), and the moments require some patience for that thing called serendipity. Having said that, Bill Murray's movie in which he plays FDR is premiering here, and where Bill Murray is…there's bound to be fun.

There are a lot of new luxury hotels in Toronto this year. What's the buzz about them in terms of stardust?
The flagship Four Seasons—the new such hotel in the city where this particular brand was born—is unfortunately not opening until October, so it'll be the first Four Seasons-less festival in memory! It's going to be a duke-out, for sure, between some of the newer players, including the Ritz (which had lots of Clooney action last year…), the Shangri-La, of course (Jackie Chan is booked for an event there, I can reveal!), the months-old Trump (Sting was just spotted breakfasting there), and then some of the more established players now, i.e. The Hazelton (which had Bono and Madonna in the house last year) and the Windsor Arms (Clint Eastwood's place of choice).

The TIff Bell Lightbox opened downtown a couple of years ago as the official home base for TIFF.  Has the festival scene, which has traditionally been in Yorkville, also moved downtown?
The gauntlet was put down last year, for sure—and a good deal of the Fest has shifted downtown. But it's not an either-or, from my  perspective. [The move has] created different celebrity fault lines, and lots of ’hoods in the city that would never have seen TIFF action are getting it now. It's just a wider net. The Lightbox, of course, does create a certain energy around the King West corridor, what with many of the speakers and special happenings down there. Earlier this year, the Prince and Princess of Monaco were by for a special exhibit devoted to Grace Kelly.

What do you think Toronto audiences  are like? Does their reputation for being too nice precede them? And can you make any overall comparisons between TIFF and Cannes, Berlin or Venice's film festivals?
TIFF is special, it's said, because it's a big-biz fest, with a lot of buying, selling, and cajoling going on. But it's also a very public fest, in that anyone can go the films— this creates a kind of particular public opinion laboratory for films being launched. Toronto being a city of a certain scale, with a varied audience, it's a useful laboratory, indeed, I'm sure. Also: It's a bigger fest, with more options, and more stars than, say, a Cannes or a Venice—although, of course, minus the Instagram glamour of the Cote d'Azur or the Grand Canal. Because of the point in the calendar, and its relative proximity to L.A. and NYC, and its track record in launching movies that went all the way- (think Slumdog Millionaire, The King's Speech, or even the Iranian movie that won last year's Best Foreign prize, A Separation), TIFF is the no-question launch of Oscar plotting and jockeying.