My second day in Toronto started off with me being greatly anxious about the day because not only were things really getting into film festival gear, I was going to see three films, and meet a few online friends.

I received a text msg from David G, a friend who posts at Awards Daily, informing me at the wee hour of 9:30 that he was already in line at the Ryerson for the noon showing of Rust and Bone. Marion Cotillard is to David, what Michael Fassbender is to me. So naturally I totally understood his devotion for being first in line. And as a bonus for me, his enthusiasm allowed us to be first into the theatre of a sold out 1500 seat venue. I wasn't sure if Marion would be there, but as the film was being introduced, we were informed that Marion and the director and her co-star would be there after the film for a Q&A. Also, another friend from Awards Daily, Miran, was first in the Rush ticket line, and he was able to get a ticket and hook up with us all. 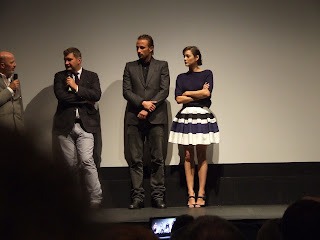 A very good film about a woman, Stephanie, (Marion Cotillard) who is a dolphin trainer who has a horrible accident that causes her to lose her legs. The other story features a man Alain, (Matthias Schoenaerts) who travels to his sister's house in Belgium with his five-year old son to seek assistance and a better life. By a chance encounter, they meet at a bar after Stephanie is beaten up by a guy she lead on. Alain helps her and that becomes the first and last time they meet, until she calls him months after recovering from her accident. As messed up as Alain is in being a hothead with too much energy, they wind up complimenting each other's lifestyles. Alain starts to make money with underground kickboxing and Stephanie is there to encourage him. Along the way, typical plot distractions arise, including a situation with his son, and in the end, Rust and Bone is a love story about two people who took difficult routes in life to find each other. I really liked the film, more than I thought I would. Marion may be nominated for her second Oscar for this role.

This Israeli documentary unveils to the viewer the moral dilemma that is faced with the Shin Bet as they  create strategic and tactic military operations against enemies of the state. Very interesting one on one interviews with former Shin Bet top agents who share their reasons and rationale behind some controversial operations. I learned a lot more about the Israeli/Palestinian conflict in this hour and a half documentary than I had for any other documentary on this subject. A person who wants to learn more about the Israeli state and what they are doing to protect it, now and in the past, would be especially interested in this documentary.

I don't even know where to begin. What was to be a highlight of the entire day, ended anti-climatically. No, the film wasn't horrible in any sense, just... not organized, and it felt forced in some scenes. While there were many moments where I was like 'wow', there were also scenes straight out of Kubrick's 'Eyes Wide Shut' that made me say 'wow' but rather more like in faint surprise, or, annoyance. The main protagonist, played by Joaquin Phoenix, is a lost as hell soul who drinks anything that will give him a drunken buzz... dangerous concoctions, and I reckon that's why he's such a confused, belligerent, argumentative, punch throwing fool. And there is The Master played by Phillip Seymour-Hoffman who is so convinced by 'his way' of the Cause, that it is his life mission to change Phoenix and bring him into his organization. Film and shown in 70mm, visually The Master was beautiful to watch. But I got lost in those majestic scenes because the film kept going back and forth into the recent past and the present without any continuity or fluidity. I would like to see The Master again, in all fairness,  because the film does have the potential to be something innovative and provocative, if only one can understand what it was trying to accomplish in the first place. Two lost men who so desperately want to love and trust each other, in reality, detest and distrust the other.


Here are some images from my tiffing on Friday: