TIFF Day 7 and The Wrap-up! 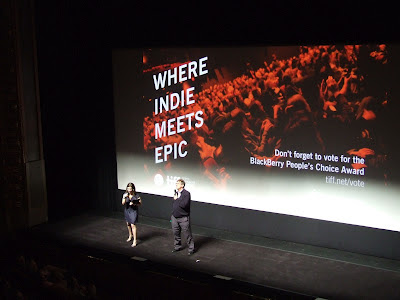 I update this blog post from home in Michigan. I left Toronto late in the afternoon on Sept 12th, and overall, it was a fantastic TIFF! But firstly, the final movie that I saw was Mike Newell's Great Expectations at the Elgin at 11am, then I had lunch with my TIFF host BFF Glenn, then I took off. Of the 17 films I saw, I didn't see a bad movie at all, but the top three are: Argo, Cloud Atlas, and The Sessions.

I have never seen Charles Dicken's Victorian book classic, even though it's been adapted on film dozens of times. And to be honest, I selected this film because it fit in on my last day schedule. In all, it was an interesting story about the class societies of the Victorian era, and a humble little boy destined to be a blacksmith, who would get the opportunity to move up his station in life and become a Gentleman via the help of a private benefactor. The corrupt human nature of many people who come into his life make him wonder if living the life of a Gentleman is better than living the non-complicated life of a blacksmith. I like period dramas like this and it would be interesting to see other adaptations. The Q&A with director Mike Newell was even more interesting that the actual film - I found him to be very likeable, lively, and funny.

Last year was the first time I was able to stay 6 days at TIFF and I noticed that by late Tuesday, some of the excitement and craziness was starting to wane a bit. The same thing occurred this year according to not only what I noticed, but what Glenn noticed, and The Wrap even wrote about it today too. What concerned me about the film schedule is that it was front end loaded to all hell this year. Thursday through Sunday was a hot mess of what to see, who to see, where to go, and how to get there! Too much choice makes people bonkers and forces them to make tough decisions about what to see in the limited time they have at tiff.

Let's face it, many of TIFF's attendees in the first few days are fans from out of town (ie. adults/people who work and have school), celebrities (some are currently filming on new projects), agents, studio people, movers and shakers, even the paparazzi... everyone is VERY busy and can only devote on average, like, 3-4 days at TIFF... IF that long! And because the majority of people travelling to Toronto can only visit for a short spell, most book their visit during Friday to Sunday - the prime time when all fans are there, top celebrities, the hottest parties, and The Powers That Be are at their most attentive. So on Wednesday morning, it was busy, but noticeably less busier than a Friday - Sunday night. And I doubt this will change in the future because it's been going on for quite a while. But TIFF should consider leaving one hot world premiere for a Thursday night, if just to get a repeat of the festival fever that was prevalent just three days earlier. But the reality of the situation would have one ask, which film, which celebrity, and which studio would be willing to sacrifice their film for a late festival screening after approximately 40% of the most vital audience has left town by then?

Maybe one day I'll be able to stay at TIFF the whole entire week because they have notable and grand festival ending celebrations and surprise screenings. And during this tiff trip, when I wasn't watching a film in a dark cold theater, I was out and about town walking around window shopping. September is my birthday month and going to TIFF has always been like an early birthday present to myself. However, I had the rare few bucks to spend, so I treated myself with the following nifty items: 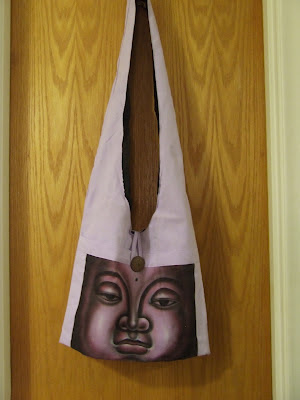 I got this Buddha bag from Andalous Exotic Imports at 425 Yonge Street. I go there every year to get something Zen like. It was 50% off so it was $6 + outrageous Canadian tax. Good deal, especially since it's lavender color.

And last but not least, I briefly walked around Chinatown between my movie screenings and I went into one store and saw this beautiful robe. What stands out about it is it's Geisha quality. It's ivory in color, and I just love the colors of the peacock and the flowers. They only had one size, XXL, and since Asian women tend to be small, I wondered why they had such large sizes. The store owner told me that it was only one size so that it could flow and fall upon the body softly and in layers. Okey-dokey lady. Sold! Only 20 bucks + outrageous Canadian tax.
When I came back to work today, people asked me how my trip was and how many movies I saw. When I told them, they just couldn't believe that I would spend so much time and money 'just watching' movies. I told them that I can understand why they feel that way, but they must understand that film festivals are for cinephiles, people who LOVE films and documentaries, and that's just how we roll.

I hope you have enjoyed reading my updates about TIFF 12! My tiff partner will email me some extra tiff images and I will post more pictures up probably this weekend or next week!
Posted by Theatre of Zen at 8:24 PM