What better way to use a Visa gift card to purchase movie tickets to catch up on the hottest films in theaters at the moment? So this weekend, I treated myself to two films that were on my must see list in December, and I'm very pleased to report that I enjoyed both immensely. 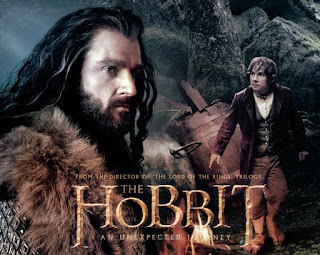 On Saturday I watched The Hobbit! The last time I was in the theater to see a Peter Jackson film from the Tolkien novels was back in 2003 when I saw Return of the King three times. Why so many times? Well, the movie was brilliant, and it was, at the time, thought to be the final film that any Lord of the Ring fan would see from Jackson on the big screen. So when we all first learned a few years ago that The Hobbit was going to be made into a film, but directed by Guillermo Del Toro, we were just excited to see the story continue, but more as a prequel to offer the back story to everything that preceded The Ring coming into Bilbo Baggins' possession. Yes, we saw a glimpse of that in Return of the King, but as The Hobbit told the story, it was much deeper than that.

In The Hobbit, it begins with the older Bilbo writing a book about his adventures so that his nephew Frodo could read about it one day. It was nice seeing Ian Holm and Elijah Wood reprise their roles, and of course it was great seeing Ian McKellen as Gandalf. But in The Hobbit, Gandalf comes to Bilbo on behalf of the dwarfs in soliciting his assistance in helping the dwarfs return to their Lonely Mountain home which they lost to a dragon, Smeagol. Slowly we are introduced to about a dozen dwarfs and some we immediately take to. They are a lively and funny bunch, but all the hysterics are probably saved for this first of three films as the dwarves are headed for a battle that not all will survive. Like in the first trilogy, a hobbit is USED again to help another race of people because apparently, due to their simple low key lifestyles and having no natural enemies, Hobbits are the go to people to help other races or all of Middle Earth from doom. To me, that makes the smallest and simplest people in Middle Earth to be the most powerful off all creatures because they are the key to solving major turmoil in Middle Earth. The Hobbit is surely an adventure that Bilbo Baggins is cut out for, and the role is wonderfully played by Martin Freeman, who does look like a younger Ian Holm. A highlight in the film is the scene with Gollum which reminds us of the brilliance of Andy Serkis and CGI. Gollum is a hot mess and we see him in a state of madness that we have missed in almost a decade.

The Hobbit, An Unexpected Journey is completely entertaining, nostalgic, and fun. It can be a little dizzying with the introduction of a lot of characters most of us aren't familiar with yet. I read the trilogy, and I have the Hobbit book, but, I just never got around to reading it. But I shall! As of this weekend, worldwide the film has passed the $200 million box office and I think it's safe to say that a lot of people are excited that a new Middle Earth saga trilogy is back in theaters again. I am too. 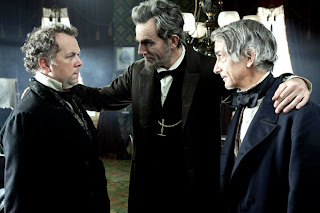 Out of all the United States Presidents, most Americans can easily say who was the 16th President, and it was Abraham Lincoln, the President who freed the slaves! In Steven Spielbeg's Lincoln, starring Daniel Day-Lewis as Lincoln, it tells the story of those pivotal two years after his second re-election, and at the height of the stupid Civil War (evil Southern states wanted to keep slaves), and his determination to abolish the slavery of human beings from Africa. Although most people know about Lincoln, they don't know the details of his presidency that is depicted in Lincoln. As usual, Day-Lewis was marvelous... he's such a brilliant actor that it's getting tiring seeing him bring to life a character, fictional or non-fictional, and the viewer totally losing themselves in his performance due to how mesmerizing he is. He will receive yet another Oscar nomination for this performance, and I'm pretty sure he'll win the damn thing for the third time. He'll deserve it!

In keeping with the tone of the day, ignorant and hateful people who sadly were in charge of the country used the N-word ad nauseum throughout the film. Sometimes brutal honesty can be hard to watch or listen to, but that did not distract me from appreciating this cinematic adventure which felt like a documentary for a bit. And that's a good thing because it demonstrates the rich research that went into creating this film. Sally Field as Lincoln's wife Molly was very good. The women back then were just... women, they gave birth, wore dresses, and did their hair, and that's about it. But the relationship between Molly and Abraham revealed a disconnect due to his responsibilities for the nation and a historical crisis unfolding which could change the path of the country. So no, he could not mourn with Molly about the death of their child, as much as he wanted to, he couldn't, he had to be the President to set things as right as possible so that all Americans can live their life free and as equals. I expected to see Lincoln's assassination depicted in the film, so I was surprised when it was excluded.

I don't understand why the Ford Theater scene was not shown, perhaps to shave time off a film that was hitting the two-hour mark as it was, but Lincoln's assassination was announced to a crowd in a theater of a different performance and the people's reaction there was used as a substitute for those at the Ford theater. For the first president to be assassinated, and for this film to be about said president, I have some issues about them not presenting the historical Ford theater incident. Instead, we see Lincoln laying on a bed surrounded by his cabinet and a doctor, and his wife grieving, and then he's pronounced dead. The film ends with Lincoln giving a speech to demonstrate not only his orator skills for those times, but to also highlight what a remarkable man President Abraham Lincoln truly was, and what the country lost too soon after he installed the all important 13th Amendment to the United States constitution. If you think long and hard about it, if there was no President Lincoln, what would the world be like today, in fact, what would America be like today? I shudder to think.