I am in the final two weeks of Fall semester of Grad school and I cannot wait until it ends. I am utterly exhausted, and very stressed out. I'm so stressed that I have a pinched muscle in my upper back from tension, and my apartment looks like a tornado has gone through it! As of this week, I had an exam on Monday, and I have to complete four - yes, 4 papers, two presentations, and a website for my Communication Activist course 'F.A.C.T' (please visit it and reply to the blog posts on the main page, it's part of my class presentation on Dec 11th) - all this must be completed by Dec 17th. I'm staying up til midnight each night, and one of the papers is for a class project for my marketing mgmt class in creating a Marketing Plan for a cool local company called Balance Massage Therapy. And yes, I already reckon I'll be using their services to de-stress after this term!
﻿
﻿There are six people in my group, led by me (I'm the top student in my class and my instructor arranged the group dynamics this way so that I could lead by example - basically, I'm a victim of my own success) - however, one person is so far not pulling her weight and it's pissing me off, causing stress too. But, we'll get this project done and when we rate each other's participation, she'll be scored appropriately. I knew this semester was going to be tough, but so far I'm doing well in each class and I'm on pace to maintain my 4.0 GPA... fingers crossed.
In other news, there is a new addition to my family as of Tuesday. I have a new niece, Mackenzie Elise, born a month early on Dec. 4th at 4lbs. I'll meet her on Saturday on a quick escape from studying. And that brings me to another thing that occurred on Dec. 4th, I received from Amazon my Dark Knight Rises blu-ray (I pre-ordered two weeks ago), and I was surprised because I forgot about it. Sadly, I can't watch it right now, I won't be able to sit down and watch it until after the 18th, which is the final night of classes this term.
﻿
﻿As I reported a couple weeks back, now more than ever I am so excited about my upcoming trip to Toronto. My friend has confirmed the tickets for the James Bond exhibit at the TIFF Bell Lightbox, and we'll see the Xmen exhibit as well, and then go another museum to watch a cool exhibit. And speaking of films, I did manage to treat myself to a second serving of Skyfall and I'm tempted for a third viewing, but, I'll save my pennies for other films that I need to watch in preparation for the upcoming Oscar season. And it's already off to an interesting start. 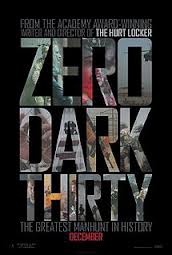 This week we have seen the announcements from the New York Film Critics, they have given Zero Dark Thirty their top honor, along with Daniel Day Lewis as Best Actor for Lincoln. But the National Board Review also named ZDT as the top film, but gave Best Actor to Bradley Cooper. Hmmm. But what really impressed me was the Best Original Screenplay winner for 'Looper' (read my 9.5/10 review). Usually in December/January, I go to the theater to check out the new released films that are hot and part of the Oscar chatter, so that means I'm obligated to see ZDT and Lincoln automatically. Perhaps I'll see one of those in Toronto. I can tell you which films I'm very lukewarm about, and they are Django Unchained and Les Misérables. You know, sometimes there are just films that don't turn you on, and of the films released this month, these two are the ones I'm least interested in. Quentin Tarantino's latest film 'Django', I have heard about all this summer and it automatically just falls into the 'wait until it comes out on DVD' films. And for Les Misérables, I just don't like musicals, so that has been scratched off entirely from my must see list. But just because I don't like musicals doesn't mean that Les Miz is not a good film, it most likely is as it is directed by 'The King's Speech' Oscar-winning director, Tom Hooper, and starring Hugh Jackman and Anne Hathaway, but I'm still not moved by it.

Here is the NBR list of winners per Hitflix:

Read more at http://www.hitfix.com/in-contention/national-board-of-review-names-zero-dark-thirty-best-picture-of-the-year#xAYJKVkhX32DhlbO.99
Posted by Theatre of Zen at 9:00 AM