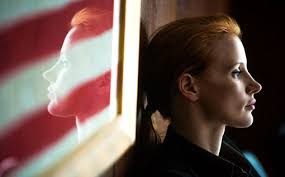 Since the events of 9/11, I have refused to watch any film depicting that day in New York City. I was living in the city at the time and I coincidentally had the day off from work. I lived in the Washington Heights section, just a mere stone's throw from the George Washington Bridge. I was about 5 miles away from the World Trade Center and I will never ever forget that day. I don't need a film to remind me of what happened, nor do I want to know the artistic re-enactment of what could have happened of the planes that hit the towers, the pentagon, and hit the ground in Pennsylvania. However, I had hoped that the mastermind behind 9/11 would be caught and punished like the subhuman that he was. So I was intrigued about Zero Dark Thirty to see how the operation to find and destroy UBL was developed and ended.

This Kathryn Bigelow directed film has recently been nominated for five Academy awards, sans Best Director, and there is a great deal of controversy surrounding the accuracy about the usage of water boarding and other torture techniques of terrorists to find answers to track down UBL. What makes me raise an eyebrow is the coy manner of our government in trying to deny and denounce any discussions about the torturing of prisoners and known terrorists. Zero Dark Thirty starts off with an uncomfortable torture scene where a man is slapped around, denied food and water, slept deprivation via heavy metal music blasting, shoved into a 2x4 wooden box, and simulated drowning (ie., water boarding). The torture scenes seemed realistic and unbearable, but not head turning like the gross blood/torture-porn Hostel movies directed by Eli Roth. I also find these controversies suspicious as the award season is underway, similar to what Bigelow had to deal with back in 2009 for The Hurt Locker.

But with all this precursor information aside, I found Zero Dark Thirty to be an extremely well made film. It was entertaining in the sense that it had some intriguing espionage scenes, and several heart stopping terrorist act moments that brought home the 24/7 danger that CIA operatives and special agents constantly have to deal with. What I really enjoyed about ZDT is Jessica Chastain's character, Maya, who is a standout female in a testosterone driven environment, but she is as cool and strong as she is intelligent and tenacious. Her role could have all too easily been a male figure, so it's all the more awesome that she is the brains behind connecting the dots to locating UBL.

The final 35 minutes of the film is very intense as it leads to the most covert CIA and US Government approved operation of the past decade of infiltrating the compound in Pakistan where UBL had been hiding out. With brilliant stealth, the team of US Special Ops go in and room by room, search for him and kill any adult figure that stands in their way. Eventually, in the last room on the top floor, they find UBL and kill him, and make sure he's dead by pumping more bullets into his body. For a moment, I felt as if I were watching a propaganda film which gave me a cathartic release after ten years. The man behind 9/11 and a host of other terrorist acts the world over, was dead.

The film does not go into the events after his body was removed from the compound. Americans and millions of citizens around the world do not have proof that UBL has been killed. And although I have questions and my curiosity may be too curious for my own good, a part of me believes he is dead, but the other part of me wants proof and I'm not satisfied in the least with how the government disposed of his body and pretty much treated the populace as children by telling us, 'He's dead, we won't show you proof, now carry on'.

I respect the work and research that Bigelow and her producer Mark Boal took to create this film.  Apparently they uncovered some information that is featured in the film, which has prompted the State Department to investigate how they found their information, and who were their CIA contacts. Regardless of the controversy and politics, ZDT is on target to be the #1 film this weekend with an estimated box office of $24 million.