Vera tackles the issue of the use of foul language and profanity in literature and in films. I can understand her concerns and this is definitely a case where different tolerance levels have thresholds about profanity. I personally am not bothered by it so much. The context that foul language is used can really express the outrage someone is feeling, or to be funny, the hysterics of a situation. However, when profanity is not expected, to the individual who is concerned about it, may find it completely unnecessary and even rude. Like everything, there's a time and a place for cussing. 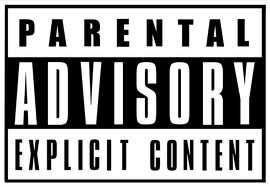 To Swear or Not To Swear?

I have recently finished reading Too Big To Fail, a book devoted to the financial turmoil of 2007-2009 written by Andrew Ross Sorkin. I have read another two books on the same topic, specifically, The House of Cards by William D. Cohan and Colossal Failure of Human Sense by Lawrence G. McDonald. I am really into this topic, since I am interested in the peculiarities in financial systems in different countries, and I think that the events of 2007-2009 are a great lesson to us all and should be thoroughly studied and learned from. But now I do not want to talk about the complicated financial instruments or management styles described in these books, but about another important element of the everyday life of the books’ heroes, as well as of our own. And this element is abusive language or swear words and reflection of its usage in fiction or films.

One can generally assume, that the more intelligent and sophisticated one’s profession is, the less the volume of swear words used in daily routines. I also thought so, although I myself am an auditor, a profession quite distant from, say, coal mining, but I use swear words quite often and every new year I make a resolution to swear less in my everyday life. But maybe in my case this is just my parents’ failure. LOL.

After having read the books I mentioned in the 1st paragraph, I found out that investment bankers and government representatives also tend to use quite an excessive range of swear words at work. Of course, the books described individuals in a state of uttermost stress and facing unprecedented circumstances, but still the amount of abusive language was quite large. In addition, the books contained references to emails written by investment bankers and traders to each other and to their immediate supervisors, and to commonly conducted conversations, which also contained quite an amount of swear words. As the authors of the books gave detailed lists of their sources in the end of the book, I am inclined to believe that the words used by the heroes were actually said aloud or written, that it was not just the imagination of the authors. In addition, otherwise they would participate in a hundred of lawsuits for each chapter.

There were two things that were new to me. Firstly, as I have already told you, I wasn’t entirely ready to face the fact that investment bankers, who generally are really, really smart guys, swear so much and on so many levels in the chain of command. But this perhaps shows that everybody is human and has the same weaknesses. Secondly, I was quite surprised that all these words were thoroughly reflected in the books. A lot of swear words printed out and distributed to the general public. The reason why it was so surprising for me is that I have never come across this volume of abusive language in Russian books. Never.

And this surprised me even more. I am not closely acquainted with all the aspects of English abusive language, I am aware of general concepts, such as the F**k word or shit or bitch and many other frequently used in movies or books, and I am sure there are still many many layers of ways to express your anger or frustration. Yet I am also sure (and here I am somewhat patriotic) that Russian abusive language is far more rich and extensively used. I myself and several colleagues of mine are really great examples. I am also convinced that generally used Russian swear words are much stronger than their English analogues. Our abusive language also has one peculiarity: we can actually express admiration or devastation using the same highly abusive word.  Friends of mine, who have studied abroad, always recalled that the first thing their classmates asked them about their country or their language was a request to teach them some swear words and to explain how they could use them. But I am being carried away.

So, having an enormous amount of really strong swear words at their disposal, our writers, even those who explore topics similar to the ones described in Too Big To Fail or The House of Cards, therefore, who supposedly may reflect similar conversations, do not use the swear words. And even in they use them, they do not print them, covering a most abusive part of the word with *** symbols. Yet the volume of the abusive language used and printed in the books in English that I have read (and this is quite a number) for some reason extensively exceed that of Russian ones. Puzzle of puzzles for me.

Same goes for movies. I have watched Too Big to Fail, and found out that much of the abusive language migrated there as well. The most vivid episode for me was the one where a CEO of a major Wall Street bank asks his assistant to tell a government representative to “fuck and blow” him. It was quite offensive, to my mind.

And then we have movies in my country, where the swear words are not even translated from English into Russian. I mean the closest we would ever get to “Go fuck yourselves!” uttered by Wolverine in the X-Men: First Class will be “Go to hell!” or “Damn you!” which is not really the same. Movies in Russian also do not contain that much of swear words, the strongest word I remember is of the scale of bitch or damn. No really strong ones are included.

Once I started to think of the reasons for such elimination performed by directors and playwrights, I figured that maybe we indeed use a little bit too much of swear words in our everyday life, and given the fact that movies or books are generally considered separate worlds of their own, we want at least to safeguard these fiction universes from our daily routines. Or maybe the concept of the fact that books and films are being in general considered to be works of art of sorts, and a true artist is somewhat above all routines of everyday life, and are generally considered to be more educated or better brought up.

Here we again come to the question why the usage of swear words is not like that in English books or films, and I think one of the possible answers is general tradition and more freedom given to express oneself. It is generally known that in my country number of restrictions put on people of creative professions is considerably more than in the US or UK.

To sum up, recently I very much enjoyed financial crisis related fiction written by American authors, and was very much amused by the usage of swear words within the text. This fact has given me quite an amount of staff to think about, as I hope it will give you as well.