The superman DC comics is one of the oldest superheroes, first created back in 1933, so Superman has been on the conscious of comic book and superhero lovers for many, many decades. I think the main appeal to Superman is that he is also the only non-human superhero who really is more human than most humans, if you're following me. What I'm saying is that his love for humankind and Earth is ironically stronger than what most humans feel towards each other and mother Earth. In this latest re-visioning of Superman, directed by Zack Snyder, 'Man of Steel' is darker than the Superman of the past in its explanation about how Superman's home planet, Kryton was destroyed. We also learn that the 'S' on his uniform is not just a mere letter, but a symbol of Hope from his world. As the soul survivor of a dying planet, Kal-Al/Clark Kent/Superman was shipped off to Earth to live a full life and be a productive member of Human society.

I saw Superman on Saturday evening with a sold out crowd, I even saw one college age student don his Superman cape to this screening. Never have I witnessed before so many solid groups of friends and family members,  12+ people going to the show together, and thereby making finding seating together quite difficult. But when the film began, you could hear a needle drop because everyone was just absorbed into the re-telling of another Superman film. Although there were a lot of young kids there under 10 years old, this Superman did not have the bubble gum campy style of previous movies, this was serious, the real deal.

Superman's parents send their son off alone to Earth with the essence of the unborn people of his race bonded within his DNA. When General Zod (Michael Shannon) learns that Jor-El, played by Russell Crowe, stole the relic that is key to the survival of his race, he makes it his mission to find the boy one day to get it back. Gen. Zod and his posse are imprisoned for their murderous activities and coup attempt, and frozen for eternity in another part of the galaxy. Meanwhile, Kryton is dying and the core of the planet starts to destroy the planet until it is nothing more. On target to Earth, baby Kal-Al is on towards his new home where he is lovingly raised by the Kents played by Kevin Costner and Diane Lane. As Clark Kent grows up (wonderfully played by the ridiculously hot Henry Cavill), he knows he is very different and his father explains to him that he needs to keep his powers to himself because people will be scared of him and ostracize him. But through a series of accidents and the desire to save people's lives, and through witnesses of his abilities, Clark has to move on in the world and work at various jobs to keep busy. 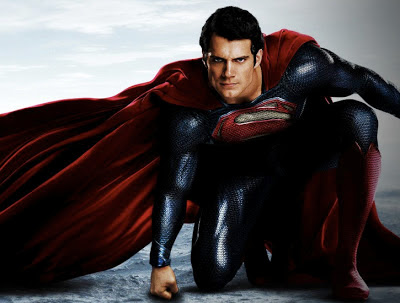 One day he learns about a large mysterious hidden object found frozen in ice, and he goes to inspect it to find that it is a ship that his father sent to Earth 20,000 years ago. Clark learns more about his identity, home planet and race of people through clever conscious imaging of talking to his father Jor-El. This is where I appreciate the new re-visioning of Man of Steel, it allows us to understand and see how Clark comes to appreciate and recognize his extraterrestrial identity and embrace it proudly and to use his abilities to help Earth. However, once Clark entered the ship and activated it by using a device he had on him since birth, it sent a signal to Gen. Zod's ship and the chaos begins.

We are introduced to a new Lois Lane played by Amy Adams. This lady is strong, and a smart journalist. She learns about Clark's true identity by following him onto the ship hidden in ice and soon becomes his curious friend. She is so amazed by this story that she is compelled to write about it, but her editor, Perry White, played by Laurence Fishburne feels that it is not a story that they can published because it would scare people. Hell bent on getting the story out there, she finds another way. So in Clark's 33rd year of being on planet Earth and learning of his abilities, Gen. Zod shows up on Earth and he demands Earth to surrender "one of my citizens" or the entire planet will be doomed. Clark realizes that he has to surrender himself to Gen. Zod to prevent Earth from being attacked. However, he doesn't trust Gen. Zod, and his gut instinct was  right. In the end, Clark must choose to save Earth, or finish off the last few survivors of his race. He makes the choice, and it's gut wrenching for him... the sudden realization that that decision is in his hands and once he makes the decision, it can't be undone.

The grandest fight scenes in the superhero genre can be seen in Man of Steel as Superman fights with the few  remaining members of his race. The action and CGI in this film, which is a trademark of Synder, is exceptional and exciting! There has been what I sense to be a smear campaign by rival studios and fanatic fans of Marvel comics, totally set on talking garbage about Man of Steel. Some film critics review of the film make me wonder if they even actually saw the damn film, because if they did, some of them wouldn't be so childishly negative as they have been. But ignoring those fools, you can see for yourself that currently at IMDB, the rating is currently at an impressive 8.3 (I submitted my vote too of a 9). And more impressively, it has scored an A- at Cinemascore,which is the default source for haters to refer to in trying to justify their critical attack against a film. Ha, you lose suckers!

I want to see Man of Steel again, it was that good! Rarely do I desire to watch a movie again but this was thoroughly entertaining, not a dull moment, or a lag within the film. Superhero movies are design to suspend reality. And based on some of the negative comments about the film, it appears that superhero films are now being held to a much higher standing, be it the quality of the acting, the set design, the usage of CGI, and a believable plot. To me, Man of Steel had met my standards in these criterias and I suggest to you to just ignore the exaggerated negative criticism, which again has an agenda behind them, and just enjoy this film for what it is; a great superhero story that was in desperate need of new blood and a beautiful actor whose own personal reserve elevates Superman to new levels of entertainment, and bring in a new audience. According to Deadline Hollywood and Box Office Mojo, Man of Steel is breaking June box office records and on its way to a least $150 million world-wide weekend (still has many markets to open up in , including China). Congrats to DC comics in finding the perfect new Superman in Henry Cavill!