Another interesting TIFF day started off with two very good films, and I ended the day walking out on my third film.

Night Moves 8/10 - Three eco terrorists (well, when you use 1500 lbs of sodium nitrate to blow up a dam, you're a terrorist) find themselves facing a moral dilemma when something goes wrong with their plans. They don't think about the consequences of their actions and the long term emotional effects it'll have on the community and on their conscience. Jesse Eisenberg and Dakato Fanning star with Peter Saarsgard as morally righteous environmentalist who want to take matters into their own hands and make a point to The man, the world, humanity, etc., but when their actions take on a tragic turn, loose lips can get them all in trouble. 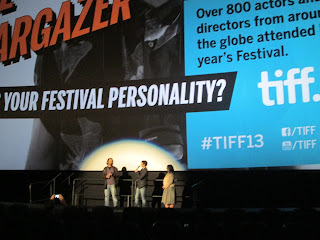 Mystery Road 9/10 - this was a brilliant story about an aboriginal police officer who is trying to solve the murder case of a young aboriginal girl. The racial and socio-economic tensions in his community does not make solving this case easy. He's getting attitude from his fellow policemen, and the aboriginal people in this small Queensland town don't respect him much either because they don't think he's one of them anymore, now that he's a policeman. But someone has to solve this case and it is his determination to find out who. He can't trust everyone, and there is something dirty, unlawful, and sinister going on and he is going to get down to the bottom of it, regardless of the veiled threats against his own life and family. The actor who plays the aboriginal officer is Aaron Pederson and he did a brilliant job. This film also stars Hugo Weaving as a cop that you just don't know whose side he's on. I hope this film gets distribution so that more people can see it, and I think it's brilliant enough for Australia to submit for Oscar consideration as Best Foreign Film.

Third Person 3/10 - Three men living three different lives dealing with the women in their lives. It's suppose to be funny, but I didn't laugh. I walked out within the first hour, and that was 45 minutes too long. I'm not a fan of Paul Haggis, and I have proof now to stay away from his work from this point forward. What a waste of talent in this movie.

In the ten years that I have been attending TIFF, walking out on Third Person was the first time I've ever walked out on a film.

My patience has been tested several times during this TIFF event because I'm getting fucking tired of people trying to cut in line because they don't feel like getting in the back of the long line due to arriving later than everyone else, and not wanting to lose out in getting select seats. I'm also tired of the people with big ass heads who block my view, I'm tired of slow walkers, I'm tired of het couples displaying obnoxious PDA in lines (get a fucking hotel room bitches!), waiting in long lines for long periods of time and having films delayed, etc. Don't get me wrong, I love TIFF, but the hassles sometimes are very, very annoying and stressful! Maybe TIFF shouldn't have so many films because I have never seen such foot traffic chaos in all my years. It makes no sense whatsoever to delay people from entering into their theater, after the lights are turned down to start the film. When 50 people still need to find seats because they were being held up due to mis-communication or ineptitude, this is not cool, it's poor customer service, and extremely disruptive to everyone.
Posted by Theatre of Zen at 11:45 PM