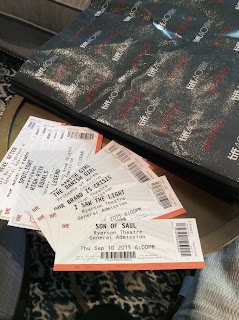 I have a much needed break between screenings here at the 40th Toronto Int'l Film Festival. It's always so exciting to be in Toronto, and the film festival makes it all the more fun and exciting. So far, I have seen some very cool films, and several that I did not like at all.

Each year I assess the festival and it's getting grander and grander each year, with more people attending each year. And like in years past, changes are made at the festival for regular movie fans and industry folk. Some changes are good, some not so good. The primary not so good one is that screening tickets were much harder to come by this year because they sold out almost instantly. And the film schedule was very, very tight this year. As you can imagine, 399 films spread out over 10 days is a lot! It's almost too much and causing screening conflicts. So not only was I shut out of The Martian, Demolition, and Black Mass, several other films were in direct scheduling conflict with other films I wanted to see, leaving me in the position of not being able to see a certain film during this festival. 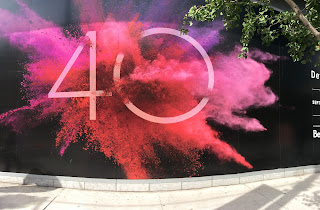 But of the films I have seen, here is a quick run down of what I have seen so far. I'm not going to go info a full review, just a brief description and the grade:

Son of Saul - a horrifying holocaust film from one man's perspective as he desperately tries to give a dead child a proper Jewish burial... at the sake of his and other's escape plans. A-

Our Brand is Crisis - American political campaign consultants hired to help Bolivian presidential candidates win an election. I hated this with the passion of a thousand suns. It was not funny and I tire of the Americans save the day theme crap. D+

Where to Invade Next - Michael Moore explores social, financial, educational, health, etc., programs in select European countries that the USA should adopt to improve our country. Standard Moore comparison documentary of how America sucks in so many things and fail its citizens. If anything, this document, as well intended as it was, made me embarrassed to be an American because of the significant flaws in our society and government. B+

I Saw the Light - Tom Hiddleston plays Hank Williams and shows how this beloved country singer's alcohol abuse and physical problems, as well as his philandering ways, made him a spiritually broken man by the young age of 29. Tom sang all the songs and he was fantastic, as was Elizabeth Olsen as Hank's first wife. You don't need to be a country music lover to appreciate this modest film. B

The Danish Girl - Yet again, Eddie Redmayne gives another Oscar performance as a man who discovers that deep within himself, he's female. With the love and support of his wife played by Alicia Vikander, he becomes Lillie and takes a great gamble to finally be happy in life by being who she really is. A very nice film, but it will be controversial with some people. B+

Kill Your Friends - An A/R record company executive will do anything to anyone in order to reach the top of the record company. Set in London in the 90s, the soundtrack to the film is awesome. B

Legend - Tom Hardy plays both of the deadly Kray boys, Reggie and Ronnie, as they set out to make names for themselves in the 1960s in London. One is clinically insane, the other is more diplomatic but with anger management issues. A very entertaining film which showcases what an incredible actor Hardy is. A-

Equals - Set in the future after over 70% of humanity has died from wars, this dystopian society has outlawed emotions, which has been proven to be the cause of the devastation of the world. However, some people awaken from the reprogramming of their DNA and start to express emotions which they desperately try to 'hide' from others out of fear of being encourage to commit suicide, or be permanently cured. Kristen Stewart and Nicholas Hoult are both very good in this sci-fi drama. B+

High Rise - I had high hopes for this film, but it appears to be an attempt to be Snowpiercer but in a high rise condo in 70s London. Totally incoherent, nonsensical, and disorienting. I hated this, and walked out just before it ended. F

Room - This last minute surprise donor screening turned out to be a real gem. Brie Larson is a young woman trapped in a room with her son, Jacob Tremblay, for many years and together, they help each other to survive by creating their own new world. Love and will power does prevail in the end. A fantastic film! A

Desierto - A self-appointed American vigilante takes it upon himself to be on the lookout for Mexican migrants crossing the border. He murders them with his long-range rifle, and a cat and mouse game of hunting down the remaining few becomes a very chilling and tense drama. Directed by Jonas Cuaron and starring Gael Garcia Bernal and Jeffrey Dean Morgan. B+

I have two more days of the festival and three more films to screen. In the next update, I'll write more about my experiences here in Toronto and the festival.
Posted by Theatre of Zen at 11:47 PM