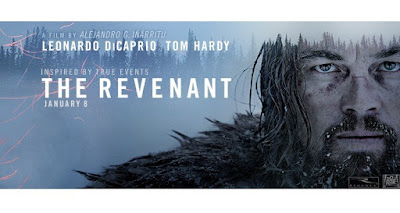 During my brief visit to Palm Springs this past weekend for the Film Festival gala, I was able to watch one movie, The Revenant on Sunday night. I have long admired Leonardo DiCaprio and have enjoyed much of his work. So I knew going in watching The Revenant, I would see Leonardo in his most top form. The Revenant is inspired by true events about a fur trading frontier man, Hugh Glass. As unforgiving as life can be in the vast wilderness somewhere in early 1800s America, people have each other and the cruelties of mother nature to contend with. The film opens with Hugh, played by Leonardo, and his half-Pawnee Indian son, hunting. Their camp is attacked by Indians in a horrific battle scene that pulls you in and gets your adrenaline pumping, makes you avert your eyes and is reminiscent to the too realistic opening battle scene of Saving Private Ryan. Among the fur trappers who survived is a surly and jaded John Fitzgerald, played by the outstanding Tom Hardy. Moving away from the siege, the survivors are dependent on Glass to help them reach a safe outpost. In the first of many unbelievable near death events, Glass is ferociously attacked by a bear that is protective of her cubs. The CGI effects is near perfection in the creation of the bear, and you feel the complete horror that Glass experiences, and every rip of skin, every toss and being flipped over several times like a piece of hamburger. When Glass is found by his comrades, he's so messed up and they can't believe he's alive. Fitzgerald makes it clear that Glass needs to be put out of his misery for his own sake. And eventually, he gets the chance to deal with Glass with devastating results.

The Revenant, or rather, The Revenge is relentless is revealing all the trials Glass has to go through as he's hell bent on revenge for being left for dead. The film becomes slightly comical in the Tom and Jerry type of deathly misadventures that Glass endures. It's like he's a human cat and has nine lives. How can a man who was mauled by a grizzly bear keep going on and on and on? And that's where Alejandro Gonzalez Inarritu's talent comes in by using beautiful spiritual imagery that helps us understand the inner strength that compels Glass to find Fitzgerald and kill the fuck out of him. Suspension of disbelief needs to be employed big time when watching The Revenant because the average man living in the 1820s only had a life expectancy up to 40, and most were simple farm people. So for Glass to experience the following harrowing events is a bit too much to accept: bear mauling, untreated infection from said mauling, fever, no medicine, unprotected from the freezing elements, frostbite (they didn't have North Face back then), broken leg, throat ripped open, rotting skin, hunger/malnutrition, PTSD, mourning, chapped lips, falling off a mountain cliff only to be saved by a tree, going over a waterfall in freezing cold water, out running Indians with arrows, being shot at, and a very, very bloody crescendo fight with Fitzgerald. And these are the outrageous sagas I can remember. I rolled my eyes when Glass, somehow, escaped death, again.

The Revenant is a well made and entertaining film, but it's not for the faint of heart and it's extremely bloody and brutal. Regarding all the talk about Leonardo finally winning his Oscar, well, he's definitely deserving of an Oscar, and the emotional narrative of him being nominated 5-6 times already and not winning, certainly has Oscar gurus, bloggers, and some voters itching like hell to just give it to him. Just give it away so that Leonardo can calm down a bit and not take on year after year of Oscar bait films in pursuit of the Oscar. I'm sure loads of voters are tired of him, feel sorry for him, are feeling guilty, and they are tired of voting for actors who simply gave stronger performances in the past. The sentimental tide is definitely on Leo's side, but I'm stubborn and believe another actor had the better performance this year (Michael Fassbender in Steve Jobs - see review).

With Leonardo receiving so much manufactured and PR paid for praise, his co-star, Tom Hardy is being ignored in the Oscar chatter. Within 12 months, Tom has been consistently outstanding in Locke, Legend, Mad Max: Fury Road, and now The Revenant. Tom Hardy deserves to be acknowledged with an Oscar nomination for The Revenant, and hell, he could even win! Whenever he was on screen as the dirty rotten Fitzgerald, I loved it. He had more dialogue than Leo - but then again -  employing suspension of disbelief - because Glass had his throat ripped to shreds by a Grizzly bear, so he couldn't say much. Sigh.

Go see The Revenant if you're up for a wild adventure tale of survival by any means necessary, witness the miracle of self-healing by being pissed off and revengeful, and lots of blood and gore (humans and animals).