I haven't updated in a bit, so I should just get everything mentioned in here that I need to mention. Firstly, I'm glad it's spring here in Michigan, even though by Michigan typical standards, that means low 30 degrees, flurries, and serious allergy flare ups. This spring also marks my final active spring here in Michigan, because as each day inches closer towards September and October, my days are numbered here and I'm California bound.

Two weeks ago, I had a very short road trip to Philadelphia to see Pearl Jam. It was a 10 hour drive one way, and at one point, I wondered if Philadelphia existed because I didn't see any signs that referenced Philly up ahead. Literally as I was on the expensive PA turnpike, only as I was within 100 miles of Philly did I see reference to it. So it's good to know that my GPS wasn't leading me into the Atlantic ocean. However, many landscape scenes were familiar driving along this road trip because in the late 90s, I lived in Maryland and took this drive half a dozen times when visiting family. Anyway, my trip to Philly to see Pearl Jam was fun and fantastic. However, when I met up with my PJ concert buddy Jim, he bragged that this was his 39th time seeing Pearl Jam. I know he has seen the band well over a dozen times more than I have, so with his self confidence in declaring that he had seen PJ 39 times, sadly, my claim to seeing them "approximately 25" times is a make believe ass lie to myself.

In actuality, it's apparent that my seeing Pearl Jam live is between the 17-20 count. Still, that's not bad and to some people, that's still obsessive. But after Jim sees PJ again for six more shows this summer, he'll be at 45 shows, and another person we both know has seen PJ 153 times. So, while I'm crazy about Pearl Jam, and will drive 20 hours round trip all by myself and spend $600 that I don't really have... there are crazier fans with a lot more time and money on their hands.

The 2016 Cannes Film Festival is going on right now, and Andrea Arnold's American Honey is getting a lot of praise. I will definitely have to see that when it's available in the US. And when it comes to the best dressed, I just love, love Cheryl Fernandez-Versini's beautiful Naeem Kahn gown. Her lipstick even perfectly match the primary fushia color theme. Perfection! Now that I am a TIFF regular, I volunteer at Cinetopia Film Festival, and have been to the LA film festival and Palm Springs film festival, I will attend Cannes one day... one day I will, I promise me! Speaking of the film festivals, I'm slated to volunteer for the Cinetopia film festival for my third year in a row in a few weeks, and it will be my final time volunteering as I'll be in Los Angeles soon. And as you know, each September since 2004, I have attended the Toronto film festival, but this year, I will not be able to attend. I'll be busy planning my move to LA, and I'll need to be very deliberate in making traveling arrangements to LA to coincide with job interviews and looking for a place to live. This move to LA is going to take everything out of me, but oddly enough, I feel an internal peace and calmness about it all. At least at the moment.

Yes, I'm scared about the move, but very excited too. I know how hard it is to make it out in LA, but I have put too much mental and emotional power into this move. I even went back to college to get my Masters degree to prepare for this move. If that's not motivation, I don't know what is. Also, my drive to Philly was a great experience to see how my car handles on long drives and I figure that as long as I drive in 10-12 hour shifts, I will make it to LA safely and comfortably.

I have started my job search and have been making a lot of good new connections via LinkedIn. But after my London/Paris trip is over, the real job search will go into full swing. I will start getting rid of stuff I'm not taking to California, and depending on what happens, I will have to put my larger stuff into storage. Whatever can't fit into my car, I cannot take with me just yet. I'll ship out probably a half dozen boxes to my new home. I did this when I moved from Maryland to New Jersey and it was a smart thing to do. Moving across town is stressful and expensive, so I want to plan, and plan, and pre-plan this move to CA to the most minute detail so I get it all right and have all that I need, when and where I need it.

Now more than ever, as I get closer to the dates of my Euro trip and then my CA move, I need to remember this: 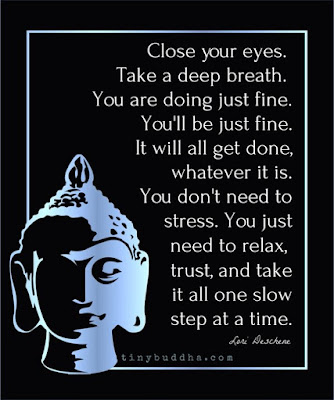