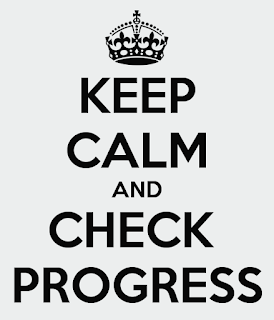 Progress
It is important to take the time to acknowledge your own progress, regardless how small. Forward is forward. Yes, you may not have achieved your main goal yet but you are moving in the right direction. I make sure to tell myself that every now and then. Often I hear people feel like they are not where they want to be, but don't ever feel a sense of accomplishment for how far they have come. Congratulate yourself. Reward yourself. Get yourself something to remind you of what you accomplished so you can remember that positive feeling. - Dr. Mitchell Gibson

This is great advice that I have to remind myself. Any action made towards my goal to move to Los Angeles, California, is progress. All these little steps will add up to making my goal, which is to have a safe relocation to the Los Angeles area with a job lined up before the end of October. So much planning is going into this huge life transition that it must come together and work out in the end.

I have to stay the course and stay positive! Om.
Posted by Theatre of Zen at 12:10 PM 1 comment:

I'm fresh back from my long, long planned family trip to London and Paris, and it was a success and I'm glad it's over. And as timing would have it, I arrived in London just as the English voted LEAVE on the Brexit referendum. While flying into Heathrow on Air Canada, at around 6:30 am, the pilot announced that England voted to remain in the EU. I was disappointed but figured they would do this. Then not 3 minutes later, he announced that he was in error, and that actually, 52% of the voters decided to LEAVE, to the 48% who wanted to remain. The gasps were audible on the plane. LOL! I had hoped they would vote to leave, but I didn't think they would have the guts to follow through on such an important and world changing event. When we landed and as I was in the long customs queue, I was reading on my ipad that the PM resigned. Holy crap! I know England will prevail once all the dust settles from this historic saga and all the crazy politics. I also hope that Parliament and the new Prime Minister does the right thing and push through Article 50 in September which will initiate England's actual exit from the European Union. Everyone who voted for Leave was very, very brave, it was a terribly difficult decision that needed to be made, and I wish my second home away from home the best! Not everyone who voted to leave is racist, in fact, a small minority are loud and proud idiot racists, but the majority of people were not and simply did not trust the direction that the EU was leading England into, and the immigration situation should be controlled by the British. Period.

Now that my Euro trip is over, I am officially in Move to LA mode. I have to work my butt off the rest of this summer to not only save for this big move, but also continue to pay current bills and rent, and look for a new job in Los Angeles. Short of winning the lottery jackpot (which I'm confident I will win big one day), I have to hustle like a mofo to be financially in the position to relocate. I have already decided that I will sell everything in my apartment that is able to be sold, and I will give away the rest to the Salvation Army, and I will put the rest into storage. I will only take with me what will fit into my car. I can't even attach a u-haul hitch to my car because it's not recommended for my vehicle type. So it will be a bare bones move at the end of October, or sooner, and I'm just going to be positive about the whole thing. The universe will take care of my needs as long as I take the proper actions to achieve what I want.

This year I started out visiting Palm Springs, then I visited Philadelphia in April, then I went to Toronto, London, and Paris... and now I have to hunker down for the rest of the summer for my final and permanent destination of Los Angeles. These next few months are going to be stressful, but in a good and promising way.
Posted by Theatre of Zen at 3:05 PM No comments: