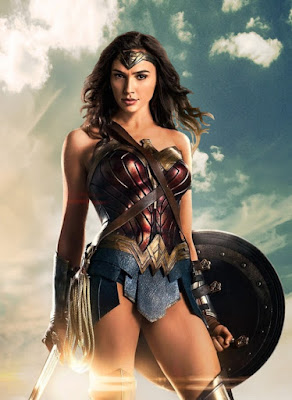 When Gal Gadot was first announced as the new Wonder Woman, I didn't see her appeal, other than being a tall, pretty brunette. But when I saw her in the film I worked on as an extra, Batman vs Superman, she turned out to be a great Wonder Woman. As child, I loved Wonder Woman - I saw her as a symbol of the type of woman I wanted to be when I grew up: Strong, smart, independent, compassionate, strong willed, and a serious ass kicker. It was wise for DC Entertainment Inc. to have a woman direct this film. Patty Jenkins did a superb job in directing WW. This story of a Goddess, raised in a secret place that is exclusively women, needed a female director's perception, point of view, and attention to details. Princess Diana (aka, Diana Price) was born to be the one Goddess to destroy the God of Wars, the universal principal behind all the war mongering carnage in the world. Through a mere accident of meeting WWII spy, Steve Trevor, wonderfully played by Chris Pine, Diana is made aware of an active world war that is destroying millions of innocent lives.

With a perfect blend of her bravery to go into battle, and her sweet naivete, which is due to her being segregated from the rest of the world all her life, Diana boldly goes into the human world and is immediately disheartened by what she sees, especially the wicked deeds of humankind. But as she and Steve fall in love, she understands more about humanity and finds a reason to tackle a menace in a way that may kill her. Throughout the entire film, we see Wonder Woman engage in battle with the evil Germans and she destroys them in amazing ways.

Wonder Woman comes out in theaters in a very difficult time of our cultural and political landscape. We all need, especially women, to see the value of a strong brave woman going up against impossible odds, and come out on top in a blaze of glory. Wonder Woman may serve as a mere reminder to women like me that women are capable of extraordinary deeds that men are not only capable of achieving. And for the too many millions upon millions of people in the world, most of them men, who believe that women are weak, second class citizens that are not equal to men, they should see this to understand why WW exist, and how she helps reinforce that women are a unique force to be reckoned with.

Gal Gadot is just remarkable as Wonder Woman/Diana Prince. She makes you feel so proud watching this film. It's not a girly film at all, at the most, it's an amazing action superhero film that is similar, but yet very different than all the rest. As stated before, this is the first female lead superhero film ever, and it's on target to earn over $100 million its first weekend! Gal Gadot is now on the map and surely she will be making a few more Wonder Woman movies because the world will certainly want more now! If you were suffering from superhero fatigue, then Wonder Woman offers the cure!