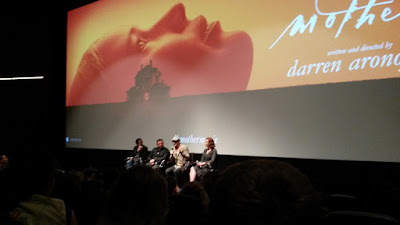 I attended the screening of Darren Aronofsky's mother! yesterday at The Landmark in Los Angeles as this was a special sold out screening due to the Aronofsky Q&A after wards. As many of you know, I'm a sporadic novice film reviewer. I don't get paid to review films, and I buy the tickets to the films I plan to write a review on. So when I want to review a film, I have no bias and I really want to give my opinion about a film. With that said, mother! is the rare film that tests my ability to articulate myself about the perfection of a film that I believe is a unique cinematic treat, and should be seen by as many people as possible, although a mere faction of its audience will appreciate it.

mother! is an unconventional film as it starts off with a hint that it is not based in the realm that we humans live in, but instead, it feels like a stage play. Off the bat, you smell the elements of biblical allegories that tug at your sleeve of things you may remember from the bible. Jennifer Lawrence stars as the wife of her writer husband, Javier Bardem. They live in a remote... suspiciously remote, very large house that she remarkably has reconstructed all by herself. She loves to keep a beautiful, clean, bountiful house, and she yearns to have children one day. But her husband is curiously distant, but he plants her hugs and kisses at the appropriate time. He gives off sociopath vibes, but she loves him so much, and want to make their home beautiful and happy, she gives him his space. One day, a stranger comes by, played by Ed Harris, and he becomes too ill to leave. The husband, who never asks his wife to be part of any decision making, invites this strange man to stay. The wife is concerned, but obedient. Too obedient, maybe it's the age difference. Then the next day, the strange man's even stranger wife comes to be with him, and she is wonderfully played by Michelle Pfeiffer. This woman is immediately dismissive of the wife, as if the wife is intruding into her space, her life! Then things really start to unravel. 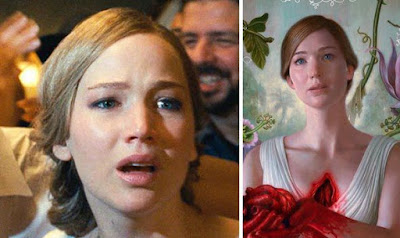 The wife is haunted by images in her home of past and future decay, a mysterious heart slowly corrupting, uninvited numerous rude stranger guests who are enthralled with her husband, and boy does he love the adulation by these selfish interlopers, and the blood shed by sibling violence which opens up a pathway to a source of power. But with all this going on, this leads to a crescendo of beautiful, crazy, audacious, funny, mindbogglingly, breathtaking, 25 minutes of Seriously, WTF?! Writing about it would be too spoilerish and it has to be seen to be believed! At the Q&A, Darren Aronofsky spoke about how this sequence brings a grin to his face. As the viewer, your mouth will be agape.

And that's not all! The final 10 minutes of mother! is super disturbing in a way that will offend those who are religious and concern those who are feminists. Birth, sacrificing for sins, cannibalism, a woman physically assaulted. All the horrors we read and see in the news of today's world events are captured in these two separate sequences of mother! And in the end, it starts all over and it makes eerie sense.

I've been reading about people walking out of the film, some having panic attacks, and I read on Twitter that the Academy screening had members standing out in the lobby during the last 10 minutes of the film. The real meat and potatoes of the film! Jennifer Lawrence deserves an Oscar nomination for mother! and the film deserves some tech noms as well, especially with cinematography, sound, and editing. This is a film that makes you think about the world today. How we treat mother Earth, how we treat women, how we become blinded by adoration and addicted to that adulation.