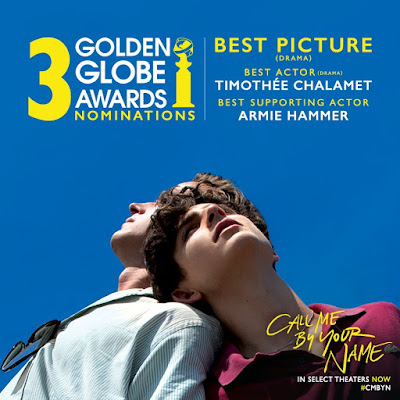 I was so excited this morning to learn that my two favorite films this year have been nominated for multiple Golden Globe awards. Call Me By Your Name (CMBYN) received three nominations in Best Actor, Best Supporting Actor, and Best Picture. It's too bad that the Best Director ignored Luca Guadagnino, but I think the Oscars will recognize him, he really deserves that honor, even though he won't win. And why not? Because Guillermo Del Toro for The Shape of Water is the director I think should win this year, and his film received seven Golden Globe nominations. 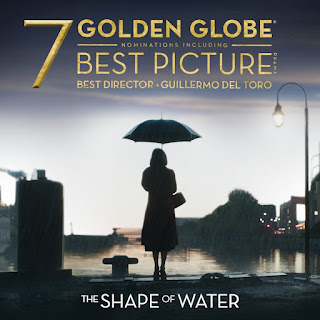 I plan to see Call Me and Shape of Water at least once more in the theater in the coming weeks. If I see CMBYN once more, it will be for the fourth time and that will be the most I have seen a film during its theatrical run. Another film I wanted to see that received several GG nominations today is I, Tonya. I had a ticket to see the movie on Saturday along with the cast Q&A, but Toyota in Pasadena found something broken on my car and thankfully the warranty covered it, but, it added on 3 hours to my already long visit at the shop. So I had to cancel the Q&A.

I'm so happy to have found some interesting films and performances to support this Oscar season. I am no longer focusing as much attention on another actor who seems to have put acting on hold, and this just allows me to enjoy the work of artists who deserve the praise for their brilliant hard work.

The Screen Actor's Guild (SAG) award nominations are this Wednesday, and if CMBYN does well there in the acting categories, it's safe to say that both Timothée Chalamet and Armie Hammer will receive well deserved Oscar nominations in January.